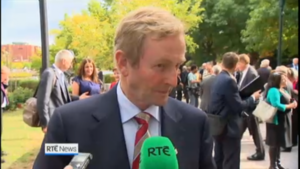 Taoiseach Enda Kenny on RTÉ’s Nine News last night, after it emerged that Fine Gael’s candidate for the Seanad by-election, John McNulty, was appointed to the board of the Irish Museum of Modern Art a week before his nomination, and that Mr McNulty was not on Fine Gael’s national executive’s three-women candidate shortlist for the vacant Seanad seat.

Catriona Perry: “Would it be usual though, if you’re given a list of three people, that you don’t pick any of them and you pick a fourth?”

Enda Kenny: “No it’s the right of the leader of the day to make the, to decide who should be nominated. I have to, I have to verify all the nominations, of all the candidates for general elections and for, and for the Seanad. So, from that point of view, the process is one that Fine Gael have always followed down through the years.” 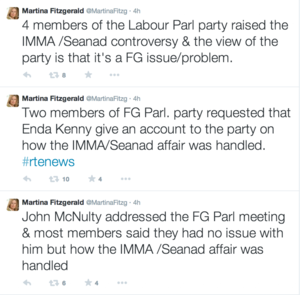 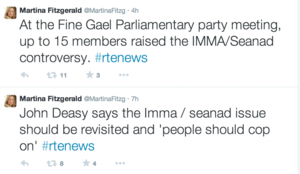 In addition, in relation to the three women –  Stephanie Regan, Samantha Long and Councillor Kate O’Connell – who were shortlisted by Fine Gael’s national executive,  Mary Regan, in the Irish Examiner, reports:

A mischievous rumour was put out around Leinster House yesterday that Labour did not want Regan — a potential election candidate in Dublin Bay North — or Long in Dublin South East in case they posed an electoral threat. “Labour didn’t want any of them running. And we are depending on their votes so we obliged them,” a Fine Gael source said. This was dismissed as a “creative” rumour and “completely off the wall” by Labour sources.