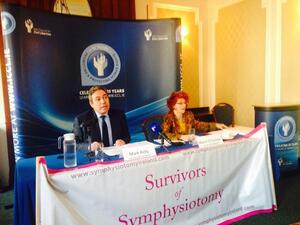 The unanimous rejection of the scheme came via a ballot by members of the Survivors of Symphysiotomy group held during Extraordinary General Meetings in Cork and Dublin over the weekend (27 and 28 September 2014). The scheme, which was presented to members of SoS earlier this month by Minister for Health Dr Leo Varadkar TD, proposes a baseline ex-gratia payment of €50,000 for each survivor who can provide proof of surgery, with​ higher payments for women who can show they suffer from a complex array of injuries that were caused directly by symphysiotomy.

Marie O’Connor, Chairperson of Survivors of Symphysiotomy, which represents 99 per cent of casualties of this 18th century childbirth operation, said:

“Our members have voted unanimously to reject the unfair and unjust scheme as outlined to us by the Minister for Health. This is an ex gratia scheme that admits of no wrongdoing on the part of the State and offers utterly inadequate levels of restitution for the physical and mental suffering that has blighted so many lives.”

“This scheme willfully ignores some of Ireland’s most fundamental obligations under international human rights law. It forces survivors to choose between compensation and justice. It contains no measures to get to the truth of how and why these barbaric operations took place. It also lacks any measures to bring those responsible to account.”

The Role Of Censorship

3 thoughts on “A Choice Between Compensation And Justice”