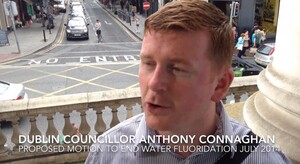 The motion was carried.

“My motion seeking to end water fluoridation in Ireland was approved at Dublin City Council last night. 98% of Europe has rejected the practice of water fluoridation and it was banned in Holland in 1976. Numerous studies worldwide have indicated potential harm to human health from adding fluoride to our drinking water. Why are we taking this risk when dental health can be dealt with by conventional methods?”

The Lesson Of Mel And Lou

They’ll Have What We’re Drinking

A Game Of Averages

148 thoughts on “Stick That In Your Pipes”