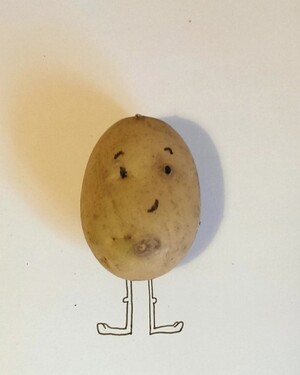 A spud-packed dinner for FOUR at the Boxty House, Temple Bar, Dublin was on offer courtesy of An Biord Bia.

Aisling: “Grease a large oven-proof dish with butter and crush some garlic and spread it around the bottom of the dish.  Layer thinly sliced potatoes, seasoning with salt and pepper, and generously sprinkling with grated cheese between each layer. When you have reached the top of the dish (maybe 4 or 5 layers), cover the top layer with grated cheese. Whisk together 1/2 pint of milk and 1/2 pint of double cream, and pour evenly over the potatoes. Stick it in a pre-heated oven at 180C and bake for approx 1 hour. Cheesey potato deliciousness is now yours to enjoy! Delicious with any meal, but is a must with a Sunday Roast or Christmas Dinner!”

Goosey Lucey: “My favourite potato- based recipe involves making tortilla using sliced par- boiled potatoes, any veggies, meat, a dollop of eggs and a good heap of cheddar.  Clears the fridge out and tastes great! Great cold too yum!”

Scooperman: “My favourite potato-based recipe involves rooster potatoes. Half, cut nice and thin, cooked in non-stick tray with small bit of oil in the oven at 180 for about 15mins. Other half mashed with butter, cream, salt and pepper. Giant mushrooms, garlic and onions sliced up really small fried with butter. Glass of white wine in on top, reduce, add lemon juice, take off heat, add cream. Striploin steak seasoned and cooked medium. Champion. (Left over mash turned into potato salad next day with mayo, lemon and loads of black pepper).”

Disasta: “Remove the potato from skin and mash with real butter salt and pepper (cream too if you want coronary pleasure).  On a pan cook some onion, garlic and ham (good chunks of ham, not sliced stuff) in butter.  Towards the end add in the mashed potato you removed from the skin and some blue cheese to the pan.  Mix this together on the pan and put back into the potato skin.  Top with grated cheddar cheese and put in the oven for a bit. Remove from oven and pile into face.”

Aida: “My favourite potato based recipe involves my mother’s typically slapdash approach to family mealtimes: Kerr Pinks – ‘loads’ (probably about like 12 if they’re of decent size)  Kerrygold butter (none of that vegetable oil low salt shite)  and proper cream. Boil the utter bejaysus out of the spuds while they’re still in their jackets. Once boiled, peel the supds while burning your fingers and cursing the potatoes for being too hot (while refusing to wait until they’re cool). Add the soft, flaky balls of fluffy deliciousness back into the (drained) saucepan. I’m not exaggerating when I say you want about 60/40 spuds to butter (okay, maybe a bit but seriously, add loads of butter).  Mash the backside out of the spuds, add a bit of cream (like half a pint). If you must, add a bit of salt to taste. Any of this high-falutin wasabi or scallion and chedder nonsense will not be entertained.”

Andrus Met: “My favourite potato-based recipe involves hot ash. (Ash-baked potatoes). Once the fire is burned down, put the unpeeled potatoes in the ash. Simple.”

Alfred E Neumann: “This won’t win, but I offer it as a service to the hungover and the young. Fry up some lumps of black and white pudding, chopped sausages and rashers, and mushrooms. Mix in with two cans of beans, and put them in an oven dish. Spread cold mashed potato on top. Press the end of a pint glass twice into the top half to make two round indentations like eyes. Put an oiled half tomato for a nose, and a sausage for a smile. Crack two eggs into the eyeholes and cook for twenty minutes in a hot oven. This is called Shepherd’s Fry. It is a triple boon to the hungover. It’s easy to cook, it’s good recovery food, and it smiles reassuringly at you. Kids also love it.”

Previously: Do You Love Potatoes?

Will YOU Shop For Good?