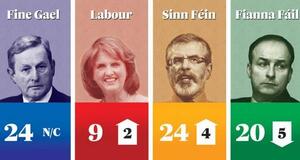 Sinn Féin is neck-and-neck with Fine Gael in popular support for the first time, according to the latest Irish Times/Ipsos MRBI poll.

The poll also shows that Labour has benefited from a modest bounce since the summer Cabinet reshuffle with new Tánaiste Joan Burton now the most popular party leader.

And it appears that the controversy over John McNulty’s Seanad nomination has had no impact on Fine Gael support since the last poll in May.

89 thoughts on “Féin In The Neck And Neck”