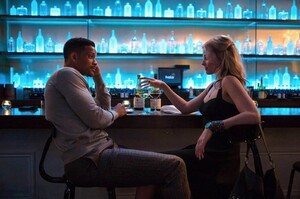 2. Will Smith is playing it safe after the mauling that greeted After Earth (2013).

3. This has been in development for quite a while. Names in the pot at various stages included Ben Affleck, Kirsten Stewart, Ryan Gosling and Emma Stone.

4. Margot Robbie follows up The Wolf of Wall Street (2013) with another gratuitous cheesecake role.

6. Flagrant Big Willie Style topless shot @2:08. Here’s hoping that, at some point, Smith gets jiggy with it.