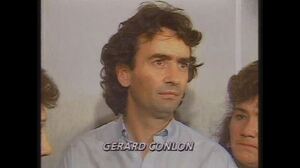 Sunday marks the 25th anniversary of the release of the Guildford Four when their convictions for the 1974 Guildford pub bombings were quashed at the Old Bailey in London.

Gerry Conlon, Paul Hill, Patrick Armstrong and Carole Richardson had been falsely accused of the attacks on two pubs, which were carried out by the Provisional IRA.

Five died and more than 60 were injured.

The late Gerry Conlon (above) was asked about his immediate thoughts on his release.

Paul Hill was interviewed recently by BBC Radio 4 on his 15 year imprisonment.