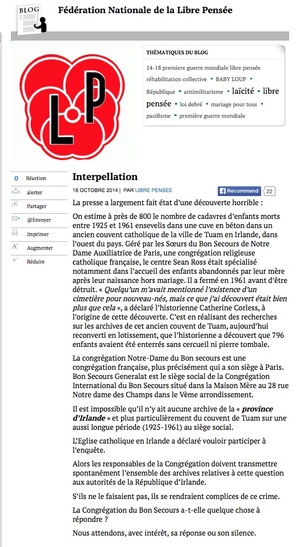 A gruesome discovery has been widely reported by the media.
It is estimated that the bodies of almost 800 children who died between 1925 and 1961 are buried in a concrete tank in a former Catholic convent in the town of Tuam n the west of Ireland. Managed by the Sisters of Bon Secours de Notre Dame Auxiliatrice of Paris, a French Catholic religious order, the Sean Ross centre specialised in looking after children abandoned by their mothers after birth out of wedlock. It closed in 1961 before being demolished. “Someone had mentioned to me that there was a cemetery for newborns, but what I found was much more than that,” said historian Catherine Corless, the person behind this discovery. While conducting research on the archives of the former convent of Tuam, the historian found that 796 children had been buried without a coffin or tombstone.
The Congregation Notre-Dame de Bon Secours is a French congregation with its headquarters in Paris. The headquarters of the International Congregation of Bon Secours, Bon Secours Generalat, is located in the Mother House at 28 Rue Notre Dame des Champs in the fifth arrondissement.
It is impossible that the headquarters does not have a record of the “province of Ireland” and especially the Convent of Tuam, over such a long period (1925-1961).
The Catholic Church in Ireland has said it will voluntarily participate in this enquiry.
Officials of the Congregation should spontaneously transmit all records concerning this matter to the authorities of the Republic of Ireland.
If they do not, they are complicit in the crime.
Has the Congregation of Bon Secours anything to say?
We await, with interest, its response or silence.

A petition from France’s Fedaration of Free Thought.