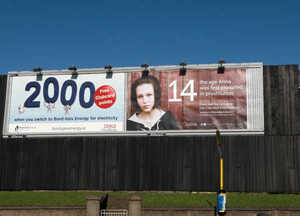 A Turn Off The Red Light Campaign billboard

Paid-for consensual sex is currently legal in Northern Ireland, though activities such as soliciting, brothel keeping and pimping are against the law.

Now paying for sex is to be banned after Stormont assembly members backed the move last night.

“As a person who strongly believes in the rights of workers, this is a blow to those who are engaged in legitimate sex work where they are no coerced. Women, men and kids will be trafficked into this but NI’s decision to criminalise the purchase of sex will drive the sex workers underground. A robust approach like that of New Zealand or Switzerland where they have a union, full health check ups and access to services like counselling etc. would ensure a better situation for all involved.
“The other thing about this is it reflects the deep catholic guilt we have about sex and the hang ups about our own bodies. Branches of feminism would call sex work oppressive, I’m on the other side of that fence, I take the feminist view that it’s allowing women the choice what to do with their own bodies, a mantra feminists have rightly said is a cornerstone to fighting male oppression.”

51 thoughts on “Paying For It”