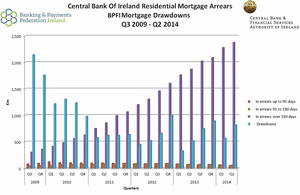 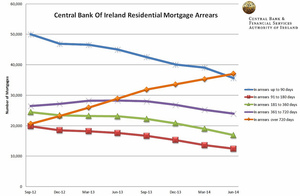 Results of the most recent stress tests on the banks are released on Sunday.

You posted a graph (about Ireland’s mortgage arrears reality) from me last June. I’ve updated it (top ) for the first half of 2014 – and the story continues not to be pretty: I’ve also charted the “Number of mortgages in arrears” figures from the Central Bank – as people assume that the amount of arrears of 180-days+ would simply grow without necessarily more people going into default – the second graph (above) shows that not to be the case..

I think it’s safe to say if any of the Irish banks pass the stress tests on Sunday – then either they have performed amazingly over the summer… or else the stress tests were less than rigorous!

Karl Deeter: Up To 25% Of Those In Mortgage Arrears Are Lying

Those Latest Mortgage Arrears In Full

16 thoughts on “Ahead Of The Stress Tests”