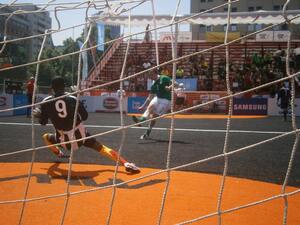 The match for the 5th and 6th place of the World Homeless Cup was the last for the day at pitch number 2 Lombardia at Arena Civica.
The afternoon sun had no mercy as the two teams went out in very good spirits: Ghana singing and Ireland relaxed and focused.
Ghana was the first to have the chance to score, but missed the opportunity and there followed two quick goals by Ireland. Ireland was standing better on the pitch in these first minutes, but Ghana managed to fight back to 2:2. By the end of the first half Ireland had slightly more possession of the ball, both teams missed a lot of opportunities, yet Ireland was able to take the lead with 2 goals before halftime.
The second half was extremely dynamic as Ghana used every opportunity to reduce the goal difference and Ireland was eager to show more and only the great intervention of both goalkeepers prevented the result from being much more than 8:4.
An examplary game for fair-play, Irealand and Ghana summerized the spirit of the World Homeless Cup under the passionate cheering of the Scottish street team [cheering in the stands].”

Tonight’s must win match V Poland has ended in a 6-4 defeat.