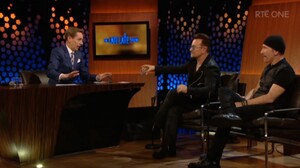 Bono and The Edge played live in front of an adoring audience and faced tax free questioning from host Ryan Tubridy on the Late Late Show.

The only bum note? iTunes and the ‘blogosphere’.

Bono: “You know what, it’s a funny thing… you know, to walk up Grafton Street and see all those buskers and think, are you sure we can do that, to eventually get to a place where we can…”

Ryan Tubridy: [taking mike from Bono] “I don’t think you need that any more. Okay, Not to put on a dampener but we need to talk about iTunes for a second…”

Bono: “What’s the dampener about?

Tubridy: “But obviously, the iTunes scenario was an enormous success in terms of downloading that album to all those people. [Bono reaches across him for water] What’s that? The water? You want my water?”

Tubridy: “How are you with the reaction to how it all went down, the iTunes?”

The Edge: “What reaction?”

Tubridy: “You tell me. What did you think of the reaction?”

Bono: “If there was any bad reaction we’d we’d definitely have heard about it on the internet.”

Tubridy: “And you didn’t hear anything?”

Tubridy: “Where are they gone?”

Bono: “They are in the blogosphere now and you know, just, you know, you can avoid it.”

Tubridy: “Do you let any of it in, the Bono bashing?”

Bono: “You know, I’ve got an umbrella and when the shitstorm happens I just.. put up me umbrella”

Bono: “You must like it that’s the thing you must like an argument we, we, I like it and Irish people don’t mind an argument we don’t mind stirring it up and’s what’s the point of being in a band like U2 if you can’t stir it up and, the truth of it is is, the music business, the model’s broken and the charts don’t really reflect what people are listening to, they reflect what good people… who are still paying for music and they’re the people also who support iTunes, so, you know, the idea that Apple would reward people who actually pay for music with a gift from them, not from us, was, was great, and, and we got to get it out there, I think there’s like whatever there is, like 80, like I think it’s nearly 100 million people now have checked out one or two of the tracks and it’s nearly 30 have taken the whole album…”

The Edge [laughing]: “Thanks for the clarification.”

Bono: “30 million people have taken this into their hearts and what took us 30 years for the Joshua Tree we did in 3 weeks with Songs of Innocence.” 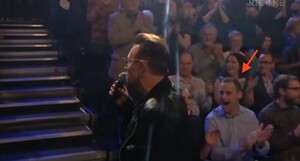 Bono At Yalta: “I’m Crossing The Great Divide. I like Cole Porter. He’s Into Ragtime Jazz

Illegal Downloads Now Not So Illegal