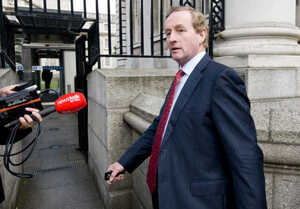 Taoiseach Enda Kenny was questioned by journalists on his way into a Cabinet meeting this morning about Irish Water.

It followed reports in de papers that the Government is considering introducing a cap of around €300 for water charges for families with adult children – €124 below the €424 charge set to be imposed on those who fail to register for the utility.

Páraic Gallagher: “Sorry, Taoiseach, you keep saying clarity and confidence for people. Many people say they just won’t pay this. Would the Government consider getting Revenue involved and forcing people to pay?”

Enda Kenny: “The Government will obviously make its decision, a statement, next week. So it’s a case of having listened very carefully to people, having acknowledged that things were not done in our case as the way they should have been.”

Listening To The People