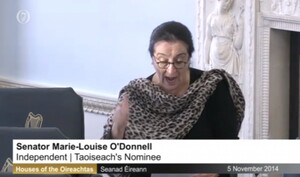 We were never taught the words ‘preserve’ ‘purify’ and ‘supply’. We were only taught ‘Install and Pay’. How much did Irish water pay the PR communications people for that?

If you want to talk about the right to life water is number one. It is not actually a right to life. There is no life without it. We are 60% water. Our heart is 73% water. Our lungs are 83% water and 93% of what we consume is water. Water is life. Without it life doesn’t exist There is nothing to compare with water. Unless you want to live on mars where it is frozen

Irish water must be enshrined in the constitution for the Irish people in perpetuity. That is the beginning and end of the argument. Not to do it would be a national travesty.

The World Bank has privatised water in hundreds of countries in exchange for loans. Nestlé bottles African water and sells it as their own calling it pure life. The privatization of pure life. Countries have been beggared and brought to their knees by Vulture funds, bank speculators, corporations who own the rights to their water who put up the bills, beggar the poor and rape the countries of their natural resources. Because they are poor and owe money.

Today large companies own 34% of the water market. Well they won’t own 35.

Privatisation is about hard technology and purchase of water rights. The World Bank rushed in to congratulate the multinationals in Argentina but the government had to re-nationalise.T hey privatised the water in South Africa but had a cholera outbreak in the poorer areas and the private companies are still disconnecting the water of the poor.

The World Bank ran into Tanzania. Privatised the water for loans, wrecked the water supply. Tanzania had to re- nationalise. The World Bank ran into the Philippines, privatised the water, wrecked the water especially with the poor. They had a cholera epidemic within the first year. France reverted its water system. Took it out of privatisation and gave it back to municipality of Paris. In Germany water agencies are owned by the public. The Netherlands declared by law that no private agency could go near the water. The European commission requires the selling of water supply for the financial bailout of Greece and Portugal.

It could never happen here you say.  You are right, do you know why?

The Irish people will not allow it. It is owned by the people for the people.

What customers was he referring to? I am not his customer. He will have no customers

In the water services act as guillotined through by the government we have legislation to protect Irish water for the people this is true. But the legislation is loose, wayward and can be interrupted and Realigned to suit a purpose. I don’t trust it. As it stands the Irish people shouldn’t trust it.

Irish water is a subsidiary of a private/public company Bord Gais. Bord Gais has already sold Bord Gais energy installation and retail to Centrica. Centrica are the British company who bought it for 1.12 billion. Centrica’s canny Irish move with our government fast-tracking a privatisation programme. There are those who have argued that Bord Gais energy was sold on the cheap. Especially the sale of the retail business and the Whitegate plant

A key reason to give Irish water to Bord Gais was the synergies between their retail operations They are now gone. Why is Irish water entangled with a private/public company And don’t tell me about off balance sheet. That is accountancy trickery.

The Taoiseach says he would never sell Irish water. I believe him.

Fine Gael said they would never sell Irish water. I believe them

Labour said they would never sell Irish water. I believe them

The independents said they would never sell Irish water. I believe them

Sinn Féin said they would never sell Irish water. I believe them

But I do not trust the future.I have hope in it but I do not trust it. No one knows what is going to happen in the next eight months not to mention the next twenty years. I want my child my grandchildren to know that Irish water will be theirs in perpetuity

Arguments that if you were to do this other utilities would demand such an enshrinement. This is crazy, puerile and actually stupid. There is no comparison to anything else on this planet to water. Water is oil. That is why the vulture funds, the swagmen and the world banks are at the sea shore. To make a profit.

It should be fair, It should be just, It should be affordable, but it can only be these things if it is ours. Not semi ours. Not private/public ours. Not under the wing of Bord Gais. Ours. Not a bit ours. Not half ours. But constitutionally referendumly ours.Then you might start talking to the people about what is theirs, what they should do with it, how they should best do it and why they should personally invest in it.We cannot treat water as the largest company on earth. When we view water in economic terms as a man servant relationship we make a fundamental change about ourselves.

We must enshrine it in the Constitution

You must be Brave, Creative, Worthy and Valiant.

Senator Marie Loiuise O’Donnell in the Seanad today before the government defeat in a vote on  a referendum on Irish Water.

‘Carrot Rather Than Stick’