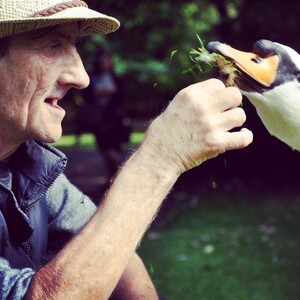 He has a way with the birds.

In the north-east corner of St Stephen’s Green, near the entrance with the bronze famine statue and rough stone pillars, the man strides the dirt path along the lake edge to his appointment. He brushes by two guys cross-legged on the grass, playing with their phones, slowly getting blazed. It’s a Tuesday in early September, and the late-summer sky is clear blue.

“The swans were waiting for you here all day, saying, ‘Where’s your man with the hat?’” yells one of them after him, a rollie in his hand and a can of Devils Bit cider in front of him. His friend grins. They’re used to seeing the man here each day, to his showing up faithful and regular at around 1pm. They watch as the man sets a drawstring backpack on the ground, reaches in and pulls out a slice of squashed bread. Around him, the swans begin to stir.

He crouches down so their necks, curved like the handles of china teapots, are level with his shoulders. He tears off one corner of bread, and holds it out between his thumb and third finger towards the two swans that are first to approach. The swans stick their black beaks forward, and tilt their heads back to swallow, then stick their beaks out for more.

The man, calm and wordless, lets the swans come to him, a slight smile as they take from his upturned hand. The man’s skin is browned and creased, his nose is large. A braided fedora, a gift from his sister’s holiday to Spain, shades his features. The thinness of his face, the legacy of a past cider habit, amplifies his stark blue eyes.

Soon there are four cygnets and one daddy swan stood in a circle around him, beaks thrust forward expectantly, as the man doles out the bread like a soldier rationing sweets to street children. They stand on their flat, webbed feet and obediently wait their turn. The young cygnets chirp at him, and the man chirps back. Four short whistles, and one longer one. Cheep, cheep, cheep, cheep, cheeeeeep.

Over the next few hours, tens of park-goers will be drawn towards Christopher “Charlie the Swan Man” Thompson, the grandaddy of St Stephen’s Green’s swans. Over the last five years, thousands have. Many gawp from a distance, then cautiously approach for a photo. Some think him an oddity, others as important a fixture as the statues and sculptures that dot the park. For those who ask why he does it, Charlie has a simple explanation: he gets restless.

Earlier that day, at a quarter-to-eleven, Charlie set out as usual. He shut the door to his sister’s house where he lives, keys jangling as he locked up, strolled down the shaded side-path, and marched out into the day. It was quiet across the Cabra housing estate. Empty driveways and dark windows. Two women gossiped over a fence, but for the most part, the streets were calm and would be until the evening commute hurries children from school and residents from work.

Charlie used to work. Not the button-down shirt, knotted-tie kind of work. When he started out, he welded oil tanks and turned metal parts in a petrol company’s workshop. Later, he hoisted slates and fixed up roofs and gardened in all weathers. All around the country, he hammered by day, and put up in cheap guesthouses by night, to save more money for drink.

It was tough when he stopped. Back then, he was living in the family house in Bannow Road. Only there was no family there any more. It was an empty coop. The silver band on his fourth finger is leftover from a bygone proclivity for bling, not marriage. As his boredom deepened, he drank more. That can’t happen again. So each morning, he locks up and starts to walk. The starting point is home. The end point is St Stephen’s Green. What route he’ll take, he’s never sure.

Today, Charlie cuts down an alley, veers right along the green banks of the Royal Canal, and onward through the tarmac and cement and boxy warehouses of the Dublin Industrial Estate. This is his “principality,” as he puts it. The area where he grew up, where his family lived. Charlie was born in a three-bedroom house on Bannow Road, within sight of the canal. His father was a cobbler and his mother was a housewife, who looked after two daughters and six sons. Charlie was the last to be born. It was 1953.

Dublin had began to creep into the rural enclave – a bus route here, a new development there – but it still felt more country than city back then. He and his siblings would spill out on the street, and kick a ball around for hours. Some days, they’d tear over to a run-down shack the other side of the canal, and play Hangman’s House. They’d stuff themselves with blackberries.

As he walks, Charlie whistles and hums, fragments of opera, and heavy metal, and Irish ballads. He ponders Manchester United’s fortunes. He’s always followed football. There were two football pitches where the industrial estate now spreads, he recalls. In 1969, when he was 16 years old, he boarded a plane to Oxford. For the next three years, he sped up the wing for Oxford United’s youth team. It was his dream. Three years later, home-sick, he returned. He missed friends and neighbours.

Sometimes, he wonders what his life might have been like if he’d stayed.
Charlie staggers his journey. He stops by Glasnevin Cemetery, where his sister, and father, and mother, who died at 25 years old, and 66 years old, and 80 years old, lie. On top of the grave, there are daffodils, and a stone heart, and a memento from Lourdes. He stops by the Botanical Gardens, and points out the giant guitar sculpture, and strokes the rose-like cacti.

He stops by the Garden of Remembrance, and lights a cigarette, and recounts the myth of the Children of Lír, and chuckles at the man in the flat-cap who pokes his head above the flowerbeds to frown at the cars honking their way through a roadblock. He stops by Paddy Power, and gets his glasses out of their ink-stained case, and raps his fingers on the shelf as he stares at the odds on the bright white screen.

He pauses on the Ha’penny Bridge. Sheltered on the water, close to the left bank of the Liffey, is a drift of eight white swans. Charlie whistles to them. He knows these swans as more than photo fodder, more than river furniture. He reared them, in earlier years, by the lake at St Stephen’s Green. Sometimes, Charlie says the swans helped him salvage his life, cured him of boredom.

About ten years ago, he was living alone in his Bannow Road house. He’d watch television, and cook meals, but mostly he’d drink. Cider, but if that wasn’t around, anything would do. He shed a stone and a half. Nobody really noticed at first. His family had their own lives, their work schedules, their kids. Three years after he took to drinking, his sister realised and took him to a doctor. Liver cirrhosis and pneumonia, the doctor said. Charlie didn’t think he’d make it.

After four months in Mater Hospital, he was still alive. After two weeks in rehab in Kildare, he was still alive. But he was bored again. The sit-in-a-circle sessions weren’t his thing, neither was Mass. “I just got fed up with doing the same thing every day,” he says. “And you couldn’t go outside.” It was supposed to be a six-month programme, but Charlie was done.

He checked himself out, returned to Dublin, phoned up his sister, and moved in with her in the Cabra estate. He’s off the liquor now. When Charlie puts his mind to something, he sticks to it. And the swans? They’ve helped. It’s the swans that compel him, every day, without fail, to get out of the house.

Charlie strides through the sliding doors into Tesco in Temple Bar. He turns right down the second aisle, past boxes of Cheerios and Pop Tarts. He leans down to pick up the 69-cent loaf of white sliced bread from the bottom shelf. At the automatic check out, he pays, then stuffs the loaf in his bag alongside ham sandwiches and the Irish Mirror.

As he walks out, he begins to whistle. When Charlie arrives at St Stephen’s Green, the six swans are waiting. Cygnets cluster by the black iron fence. In the foreground, the white mammy and daddy swans stand upright and alert. The ground is sprinkled with white and grey feathers. Swans have 25,000 feathers, Charlie says, mostly on their necks. He knows other general truths about swans: white swans mate once a year, black swans twice; swans have one nest; swans eat grass to clear out their systems.

He also knows singular truths about the swans in St Stephen’s Green: that the mother swan can be moody and snappy, but she’s protective, an admirable parent; that the daddy swan is mellow; that they’ll eat chips and peas; that last year, the come-of-age cygnets didn’t want to leave, and the rangers and Charlie had to load them into a van and motor-migrate them to the river.

Charlie squats next to the white male swan. He rips up some grass, rolls it into a clump, and holds it out. The swan sticks its neck forward, and pecks, strands of mushed grass stick out of its beak. Charlie pats its belly. Spectators arrive in waves. The regulars and the one-timers. The giggling German students. The trio with a camera on an extendable stick. A Spanish girl with a brown Penney’s bag. A chubby guy with white shorts and a striped T-shirt peers at Charlie and the brood.

“D’ya mind if I take a photograph of that?”

The man pushes his sunglasses up on to the top of his head, holds the camera out at arms length, and clicks.

Charlie slings his bag over his shoulder, pulls out his pocket watch. 3.37pm. The tempo in the park has slowed. The office-workers are back at their desks, the shoppers finished with their lunches. It’s time for Charlie to start back to Cabra. Perhaps to a fry up – sausages, eggs, and a mug of tea. Perhaps he’ll put up his feet, and flick on the television and watch the Czech Republic take on Holland.

Some of the swans have launched on to the lake, others preen on the grass. They tuck their heads under their wings, and nibble and rub their feathers with their beaks. They shake beads of water from their waxy coats. They look contented, and sated, and cared for.
Charlie won’t keep coming forever. But he doesn’t know for how long. “Maybe when these babies are gone,” he says, “I’ll go.” Maybe five years is long enough.

He retraces his steps around the edge of the lake, and heads home.

This essay is published in We Are Dublin, a quarterly magazine about the city. Issue two will be out next week in these stockists:

Previously: Here We Are Now

7 thoughts on “The Swan Whisperer”