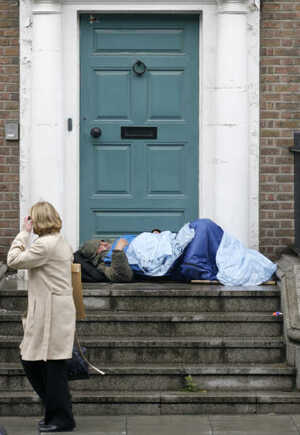 The death of homeless man a stone’s throw from Leinster House will give many pause for thought. No doubt it will be raised there as the political football of the day. That may create some rethink on releasing some small additional resources, but soon again, I fear, the issue of homelessness will be as intractable as it has ever seemed to be.

While a member of the Oireachtas I was aware of about a dozen similar perches within five hundred meters of Leinster House. It wouldn’t be fair to suggest there was or has been there any indifference. When being lobbied, speaking with homeless charities, their frustration was obvious at the lack of any co-ordinated approach to the issue.

The homeless man I remember on Molesworth Street (given the length of time I hope not the same person) would spend his waking time at the same spot shouting abuse at whoever passed by. It didn’t really matter who was being shouted at, on the law of averages by walking down that street you had to be a person with some influence and a certain degree of responsibility.

Then why the passivity of the political system? Why because to those to whom the political system is the narrow mechanism of getting and staying elected, it is not seen to be an issue ‘that had votes in it’.
That observation may add to further cynicism in which politics itself is held, however, it does reflect a sentiment that is found in wider Irish society.

The political agenda is set by those who shout loudest and produce the largest numbers. It is an agenda that has been largely untouched by the issue of homelessness because it is believed that for most people, it has been put into a metaphorical box marked ‘It Doesn’t Affect Me’.
Each of us not only has a responsibility to give homelessness the importance it deserves, but also to further question how we have developed a society where issues of homelessness have been kept on the periphery, while issues of far less significance have preoccupied us.

If we are to be angry let us be angry at this.

Dan Boyle is a former TD and Senator and member of the Green Party.

Previously: Less Than 50 Metres From The Dáil They Will Be Tay