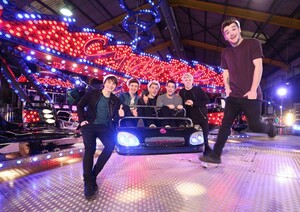 Members of Irish boyband Hometown on the ‘Cyclone’ at Winter Funderland

A tradition almost as old as Father Christmas himself.

A must in the Irish festive calendar for the last 41 years, Winter Funderland returned to the RDS, Ballsbridge, Dublin 4 last Friday and will run until Sunday January 11.

Adding to the exhilarating Winter Funderland line-up, for the first time ever Fossetts Christmas Circus have joined  the entertainment alongside iSkate, Irelands premier ice skating rink. ALSO three brand new attractions, child friendly ‘Dumbo’, ‘Magic Circus’ and the thrilling ‘Ultra Buzz’.
Winter Funderland will of course also  feature thrilling rollercoasters and a giant ferris wheel alongside well known ‘white knuckle’ rides like ‘Extreme’, ‘Snowdrop’ and ‘Take Off’. With top of the range attractions catering for all ages ‘Bounceworld’, ‘The Fun Factory’ and the ‘Crazy Worm’ rollercoaster will be sure to capture the hearts and imagination of those younger family members.

To enter, Just complete this sentence.