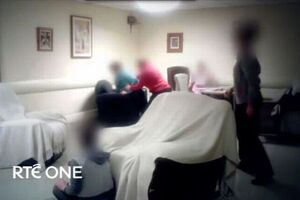 Before the Prime Time special on Áras Attracta (above).

THE fallout of the HIQA report [completed during February 2014] into the services at the Áras Attracta residential care centre in Swinford could result in former staff taking claims against the HSE for assaults they received from patients.
….A high number of staff in Áras Attracta were assaulted by patients during the course of their duties and according to Noel Giblin, the national secretary of the Psychiatric Nurses Association (PNA), the lack of staff resulted in patients ‘acting out’ because they were not receiving due care and attention….

29 thoughts on “They Hit Us First”