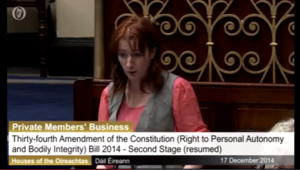 Independent TD Clare Daly addressed the Dáil last night before a vote was taken on her Right to Personal Autonomy and Bodily Integrity Bill, to repeal the eighth amendment to the Constitution to allow for abortion to be legalised in Ireland.

“I agree with the Minister of State that we should not use hard cases to make generalisations. However, that said, I am conscious that the newspapers seem to be breaking the news of another sad case. It is against the backdrop of quite a number of sad cases, even in the lifetime of the Government. While we do not and should never justify people’s opinions, what these cases do is expose that the issue of women’s reproductive health should not be dealt with in the Constitution. It should not be something battled over by legal people when women find themselves in a crisis or traumatic circumstances.”

“It is interesting and significant that every person who contributed to the debate said there was a problem with the eighth amendment and the majority said we should not deal with it now. How soon is now? When is there a right time? It is our job. We are paid to legislate and amend the law and, therefore, it is not good enough to say “Not now.””

“I am in the unenviable position of trying to summarise the debate. The main point I would like to make is that the vote will not in any way reflect the discussion we have had over the past two days, which has shown that, even in the course of the past year, attitudes have changed in the House. It is important to recognise that. A number of Deputies who supported the legislation last year have had the courage to say that provisions in it, such as the criminalisation of women and the need for scrutiny of a case by six medical practitioners, were wrong. It is good that they have put this on the record, but if we are saying it is wrong, we have a responsibility to do something about it.”

“I would like to respond to a number of points made by the Minister last night regarding some legal issues, because he was wrong about them and some of his comments were a little bit of a cop-out. He said the proposal in the Bill to acknowledge the right to bodily integrity and personal integrity was “vague” and that usually, once rights are acknowledged, the State goes on to ensure they are protected. That is not true in the case of the rights he outlined. Our Constitution, by its very nature, is open and aspirational and states broad principles. It is there to direct the Judiciary, to give guidance to doctors and to be followed up by more detailed legislation. The problem with the eighth amendment was not that it was too vague but that it tried to act as legislation and detail how abortion should be dealt with in various circumstances. It is the opposite scenario in that regard, and the Minister was wrong about it. He was also wrong in saying that many of the subsequent problems were not obvious at the time, because they were.”

“I refer to a number of points made by Mairead Enright, a human rights law lecturer. She pointed out that in respect of the Bill we have introduced, bodily integrity is a limited negative right, a right of non-interference. Members have said we protect women’s lives, but we do not; we subordinate their lives to the right of a foetus to be born. That is removed and replaced with an explicit provision and commitment to bodily integrity of born persons and it gestures towards a new approach on this issue. If the eighth amendment is removed, the entire legal landscape changes. I agree with Ms Enright regarding what should happen next, which is what happens already with many women in the early stages of pregnancy. They get pills but they should be able to get them easily on prescription from their pharmacist at an accessible price and with access to proper care and counselling. She put forward the Victoria model for the later stages of pregnancy where abortion legislation provides that a doctor may perform an abortion on a woman who is not more than 24 weeks pregnant for any reason and then after than in other circumstances. There are ways in which the follow on can be dealt with post the eighth amendment.”

“I very much welcome the fact that the Minister acknowledged that the current provision is too restrictive and stated clearly that our laws have given rise to a chilling effect. He said the result of the provision was that difficult decisions that should be made on the basis of best clinical practice are now being made on foot of legal advice. It is absolutely and utterly frightening when the Minister for Health gets up and says our laws are preventing decisions from being made in the best medical interest of women and then sort of says “Well, I’m out of here now. There’s nothing more I can do about that.” That’s not good enough when he clearly outlined that he recognised the barbarity of the provision that women must carry to term pregnancies in which there is a fatal foetal abnormality. He is the Minister and he can bring in legislation. There is legal opinion that says it is entirely permissible, even within the confines of the eighth amendment. While I welcome the fact that he has put it on the record, there is no point in saying something needs to be done. Who’s going to do it if the Minister for Health isn’t going to do it?

“The Minister said change would come in 20 years. Who’s going to do it? We are legislators and that is our job. Unless we tackle it now, we are abdicating our responsibility. On no other issue would this be allowed to wait. Along with this insult, we have our faces rubbed in it by being told we should not rush this, when nobody of reproductive age has had a right to have a say on this in the first place; when ten women today joined the ten women yesterday who had to take that journey haven’t had a say in it; when, as other Deputies said, opinion poll after opinion poll has revealed that the Irish people are supportive of abortion in a whole range of circumstances and overwhelmingly support the repeal of the eighth amendment; when the United Nations Human Rights Committee says that in order to adhere to our international human rights, we should examine our Constitution; and when everybody in the House and every political party has now said we should look at this issue. Well, let’s look at it. I agree with Members who said we should have a calm debate and that we should be compassionate and measured. Sloganeering and labelling people is not helpful, but if those on the Government side believe we need a debate on it, what are they doing about it? The only reason we are discussing this is that we have tabled legislation and pushed the issue, and that is not good enough. While I appreciate the sentiment of Members such as Deputy Ó Cuív, who said that perhaps a committee should be set up, we have had various committees, Constitutional Conventions and so on. Let the people have a say. What are we afraid of?”

“It is good that all parties are on record as saying this needs to be dealt with. Let us ensure it is in their election manifestos. People have said Ireland is not ready for abortion on demand. I do not like that slogan because it is incredibly flippant and demeaning of women, as if this is something casual that women would like to do, when in fact it is never a decision that anybody would like to have to make. The reality is that most abortions are carried out in early pregnancy by the taking of a tablet. They are no different from a miscarriage, a bit of cramping or anything like that. Late terminations come because from serious illness, fatal foetal abnormalities and other tragedies. The point is and key issue here is that it should be a choice for the woman herself. People have said that nobody has the answer, we’ll never agree. Maybe that is the answer – that there is no answer – because what is right for me may not be right for the Minister of State or somebody else’s daughter. Circumstances differ for different people and, in fact, our views are absolutely irrelevant. All we should be concerned about doing is putting in place a regime which supports people and their decisions. It is incredibly ironic that we live in a society in which we are happy for women to have jobs, run their homes, raise children, look after the elderly and the sick and run the country, but we will not allow them to make a decision about what is best for their own bodies. I will not explain the reasons people make those decisions – there are varied reasons, and no legislation will ever sort that out – but am I confident that those women will make the best decision for them? I absolutely am. That is all we are asking. The right to choose to have an abortion is equally the right to choose whether to have a child and to be supported in that.”

“I thank the Deputies who participated in the debate and I acknowledge that the debate has moved on, but for us as legislators it is not enough. We have to do something to move this on. Sadly, it is too late for another ten girls today. We should wise up to this. There is no debate about whether we should have Irish abortion. Irish abortion is exactly the same as abortion in other countries. We just have a stifling hypocrisy that says it has to take place away from here, and that can no longer continue.” 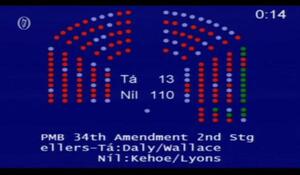 Dail debating Clare Daly’s Bill to legalise abortion. Nobody on Government benches except Kathleen Lynch. Nobody from Sinn Fein.

Previously: ‘The Role Of The State Is To Ease The Burden Of People, Not To Add To It’

Raining On Their Parade