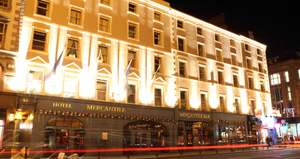 Did you see it?

know you don’t normally do this but perhaps your readers can help..Myself, my girlfriend, two other girls and a guy were out in [Dublin] town last night. We had dinner on Camden Street [Dublin] then went for one in the Globe [George’s Street, Dublin]. After leaving the Globe we were confronted by four guys who after some unwanted conversation, proceeded to follow us in the direction of Dame Street. They went out of their way to set upon our only male friend.

After walking away from the confrontation a second time they followed us again to Dame Street where we (3 girls and one guy) were physically assaulted. The area was packed with people leaving pubs as it was closing time. We’re looking for witnesses to help as a statement was made with the Gardai. The main assault on us was outside Rick’s [burgers]/ the Mercantile/Iskanders [kebab]. In the age of selfie sticks I’m sure someone has some footage. Thank you.

Meanwhile, Back On Dame Street

99 thoughts on “Attacked In Dublin”