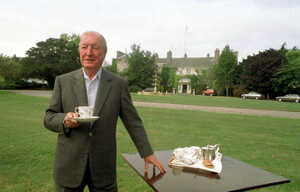 Did not some great French sage say: “Le style – c’est l’homme”? And although Mr Haughey’s politics were not always admirable, there was something human and even shrewd about my mother’s instinctive attraction to the “Duce”, to reference to PJ Mara’s renowned allusion. Above all, there was something that spoke to the historical collective memory of the Irish people.

And it’s something ancestral which, strangely enough, Charles J Haughey shared with – of all people – Mary Robinson. When Charlie acquired Kinsealy, drank Montrachet, and sat on his hunter, he was vindicating the collective Irish unconscious in a parallel version of “the risen people”. This was not “the risen people” of wild rebellion, but the “risen people” who were now as good as their lords and masters had once been – who could be as grand, as stylish, as upper-class as any belted earl who had gained land and estates from selling out at the Act of Union, or who had exchanged an ancient chieftain’s role for an endowment by a Tudor monarch.

Charlie was proof that the “risen people” had arrived. And so, in a different way, was Mary Robinson – the very embodiment of the “Catholic gentry” who showed the world that we were no longer the wild Irish so unfavourably portrayed by cartoons in ‘Punch’ and the hostile London ‘Times’.

My mother’s generation – born before World War I – has now passed away and the folk memory which propelled their hunger for style, confidence and even upper-class taste in leaders has perhaps faded. She had been born into a Galway family where old people could remember the Famine, not only the lesser famines of the 1870s and 1880s, but the Great Famine of the 1840s, too. Eamon de Valera represented austerity and sacrifice, but Charlie brought panache, elan and glamour. And, for the vicarious pleasure he gave in that regard, I do not retrospectively begrudge him the Mercedes cars, the Charvet shirts or the wine cellar stuffed with Chateau Margaux.

He loved a Merc and a Margaux – which made Charlie my mother’s darling (Mary Kenny, Independent.ie)

Selling Ireland By The Pound