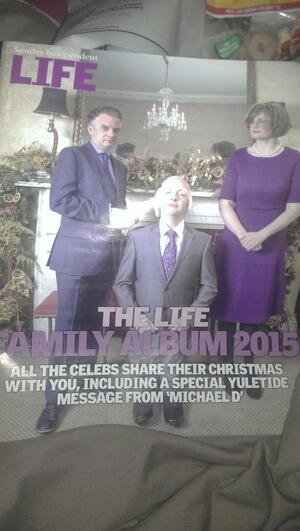 You may have seen the cover of LIFE magazine over the Christmas of comedian and mimic Oliver Callan depicting President Michael D Higgins, his wife Sabina and  presidential assistant assistant Kevin McCarthy.

“The idea that every home in Ireland should be subjected to this supposedly humorous depiction of the President, his wife and his assistant, Kevin McCarthy, seems to me to be a scandal that should cause shame to us all. This is no less than bullying and harassment in the workplace, which we are trying to phase out at every other level, but when it comes to the President and his wife, we seem to imply they are fair game. Such lampooning of our President, his wife, and his assistant can no longer pass as entertainment.”

Further to this, both Mr Callan and Mr Hederman spoke to Sean O’Rourke on RTÉ Radio One this morning.

Oliver Callan: “Satire mentions the elephant in the room and that’s what Charlie Hebdo’s done that’s what I’m doing aswell. To suggest that the President is so sensitive that he would feel this is bullying, I find that really hard to believe. I don’t make fun of people who are vulnerable, who don’t have the means to defend themselves. I also thought it was unfortunate by the way that the Abbot didn’t mention that he was a friend of the President, you know, he’s obviously very close to him. The President’s last book of poetry was dedicated to Mark Hederman as well and I thought that was unfortunate you didn’t raise that conflict of interest in your article yesterday but in fairness you’ve done it today.”

Mark Hederman: “No, there’s no conflict of interest in this. The fact that a friend of mine is being bullied is the exact reason why I should stand up and say, ‘enough is enough’.”

Callan: “But when you say ‘bullied’, how can you bully a president, someone who has the support of 1.2 million people who voted for him? Who has the admiration of the country? I mean it’s very difficult for someone like me to be…”

Hederman: “This, I’m afraid to say, it happens every single day in the workplace because, you mean. Look, I agree with you, some of what you do and some of what you say is extremely funny and I laugh at it immensely but when you go over the edge and start making insinuations about Kevin McCarthy and the President which is, kind of, you know, not stated but..”

Callan: “Well, I,  to be honest, I don’t know what you’re saying there cause I didn’t make insinuations about Kevin McCarthy, what I did raise is the very serious issue in this country and it was a very big issue in 2014 about cronyism and it was cronyism that a man, who drove the President around in the election, had a role invented for him, a taxpayers’ role, as executive assistant, a role which didn’t previously exist in the McAleese administration and that’s all I was suggesting in that. I don’t know what else you’re suggesting in anything I wrote.”

Hederman: “Right. Well, you are the one who’s gaining I don’t know how many members of your audience, because the suggestion is much more than that in what you’re..”

Sean O’Rourke: “We’ve heard the Abbot say, already Oliver Callan, that there’s no basis for any insinuation that may be read into, are you willing to accept that?”

Callan: “Absolutely, I mean the President has the defence of defamation like any citizen in the country.”

Callan: “I’m a small man myself and I don’t find it’s something to be insecure about.”

Yoda Passes On The Wisdom