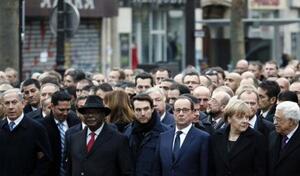 Reporters Without Borders, a nonprofit crusader for free speech, accused “predators of press freedom” of coming to Paris to advance their own agendas.
“We must demonstrate our solidarity with Charlie Hebdo without forgetting all the world’s other Charlies,” the group’s secretary-general Christophe Deloire said. “It would be unacceptable if representatives of countries that silence journalists were to take advantage of the current outpouring of emotion to try to improve their international image and then continue their repressive policies when they return home.”
Specifically, Reporters Without Borders said it was “appalled” by the presence of leaders from countries like Egypt, Russia, Turkey and United Arab Emirates, all of which score woefully low on the RWB’s press freedom index. 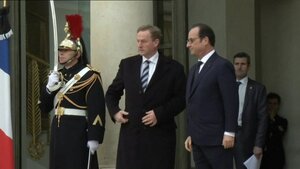 Solidarity, hypocrisy in march on the streets of Paris (MarketWatch) Thanks Judith Goldberger 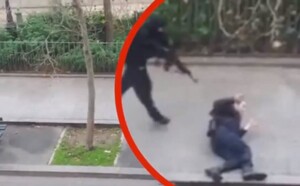 I’m no conspiracy theorist, etc, etc. but can you ask Mark Dennehy [Broadsheet-reading firearms expert] if he could examine and explain the footage of the policeman being shot by an AK47 in Paris…