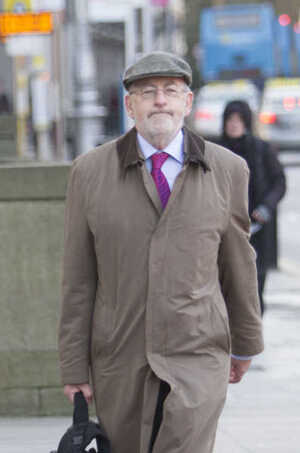 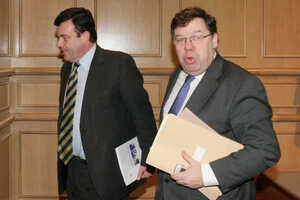 Patrick Honohan, Governor of the Central Bank since 2009, appeared at the Joint Committee of Inquiry into the Banking Crisis in government buildings today.

With the benefit of hindsight, had the regulatory authorities had any notion that heavy losses – or rather such heavy losses – could be involved, an alternative strategy, as mentioned in a footnote in the report, of putting Anglo Irish Bank and Irish Nationwide Building Society into liquidation on 29 September while standing behind the rest of the system should have been more favourably considered.

Kieran O’Donnell [Fine Gael TD]: “To revert to his opening statement this morning, he spoke about an alternative strategy, as distinct from the blanket guarantee. Had the guarantee been managed differently, would the Irish citizens now be on the hook for €40 billion, which is what the Governor has estimated to be the cost? As I find that to be an outstanding statement, the Governor should elaborate on this. Had Professor Honohan been Governor at the time – ”

Honohan: “Could it have been whittled down a bit more? Yes, I think so. A lot of whittling-down has been happening, with many public servants and others working very hard to whittle down that €64 billion, imposing losses eventually on subordinated debt holders and achieving other things. There has been a great deal of very sophisticated work, which has helped to bring it down, but it would have been very hard to avoid it all. We saw various points at which it was difficult to do things.

“I mentioned two things specifically. One was subordinated debt. The sums of money involved there, for example in Anglo Irish Bank, were relatively small. All these numbers can be got precisely, but it is around the €2 billion mark and some of that was subsequently exchanged for lower amounts. The order of magnitude of that part is not great, but the reasoning given for guaranteeing subordinated debt was very weak. Nobody else guaranteed subordinated debt, so that could have been done -.”

O’Donnell: “In that context, looking through your report, the first suggestion of guaranteeing dated subordinated debt – it was lower-tier, tier 2 – was when the banks came in on the night before, that appears to be the first place it was mentioned. It was not a part of the crisis management in terms of the options that were being looked at.”

Professor Patrick Honohan: “This is not exactly the case. When the advisors were engaged by the Department of Finance, Merrill Lynch in particular, they looked very closely at this question. I think that was the first time the question of subordinated debt came into—–

O’Donnell: “What was the reason given?”

Honohan: “The reason given was that dated subordinated debt was regarded in the market as almost as good as senior debt – as it was said,’We’ll never be haircutted on this’- so banks issued it at an interest rate that was not all that much higher than the best interest rates. People who were investing in that did not think of themselves as taking large risks, so the investment advisors were saying to the Government, “Be careful about not guaranteeing this, because you could cast doubt that will affect those kinds of investors”. That was the reasoning. In the end, the advice of Merrill Lynch was very complicated – “If you do this, then you should guarantee the loan, if you do that, then you shouldn’t”. I am not sure that was talked through in a very thorough way, because Merrill Lynch was engaged eight or nine days before the guarantee.”

O’Donnell: “In your report and certainly in your presentation, you state that “external partners might have responded to such an idea with compromise proposals that might have alleviated subsequent pressure on the Irish Exchequer” if they had been properly consulted. Around the guarantee, from your investigations, were discussions held with the ECB?”

Honohan: “Not on the guarantee as far as I know. There were discussions. Obviously, the whole of Europe and the whole of the financial world was in a chaotic situation in those few weeks. It is important to remember that was the context. There were discussions with the ECB, explaining “we have difficulties too, we have banks running out of liquidity”. This was the story communicated – ”

O’Donnell: “Who were these communications with?”

Honohan: “They would have been at the highest level in the ECB, between my predecessor [John Hurley] and Mr. Trichet. The message that came back was, “You have to look after your own banks. We don’t have a European system”.

O’Donnell: “In your report, you say that no bank should fail.”

Honohan: “I do not say that, but that was the policy.”

O’Donnell: “That was the policy. You said that it did not emanate from the Central Bank. Who made that decision?”

Honohan: “There was a decision at European level subsequent to that.”

O’Donnell: “Prior to the guarantee, who made that decision, in the Irish context?

Honohan: “The reason I mention this is that people tend to blur in their minds – there was a great public statement that no major bank was to be allowed to fail. That was subsequent, but the thinking was probably there as well, namely, ‘We can’t have any bank failing before the public statement’. I think that discussion happened informally in the European Central Bank.”

Honohan: “I think the Central Bank shared that policy view for several months before. It said, “We cannot have a Northern Rock”.

O’Donnell: “You said specifically in your report that they did not initiate that policy.”

Honohan: “They bought into it.”

O’Donnell: “Who initiated it?”

Honohan: “I think this was an official-level discussion, informed by discussions worldwide. This was the mood. Certainly after Lehman Brothers failed, there was this European reaction that America had done terrible damage to the rest of the world by letting Lehmans fail. Indeed, they let another bank fail a few days later.”

Deputy Joe Higgins: “To return to the professor’s non-intrusive regulatory environment, conducive to promoting the IFSC as considered important by the Government, the Department of the Taoiseach took a lead role. The professor referred to the clearing house group and for people who do not know, that body that was set up in 1987. It provides incredible access to all the leading financial institutions, big banks, etc., to the highest political offices in this land. Is that correct?

Honohan: “In fairness, I do not think there are political people at the clearing house group. I think it is all officials.”

Higgins: “Yes, but they are officials who are the key advisers to the Taoiseach and the Minister for Finance.”

Chairman: “Department of the Taoiseach officials are there.”

Honohan: The Department of the Taoiseach attends, but it is the officials.

Higgins: “Was participation of these officials in that type of industry-heavy grouping not a restraining factor on the Regulator, who was also a part of that structure?”

Honohan: “Of course, it was part and parcel of being in charge of the development of the financial services centre. However, nowadays, I would want to have somebody there watching what is going on, but not contributing to any weakening of regulation. I would not like to have those meetings happening without sufficient sight of what was being talked about.”

‘The Rationale Remains The Same’