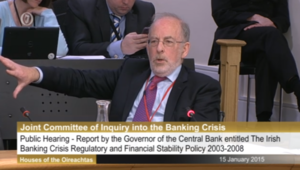 Honohan now admits to #bankinginquiry that his current view on liquidating Anglo was not the view he had in September 2008 — Gavan Reilly (@gavreilly) January 15, 2015

Anglo should have been allowed to fail, says Honohan. #bankinginquiry

So Irish media is suddenly discovering that Anglo should've been let fail, now that Prof Honohan says so. Where were you all these years?!