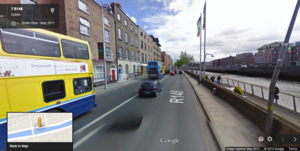 Four options for a segregated two-way cycle route along the quays in Dublin City are expected to be made public next week and public consultation is due to start on the preferred route along the River Liffey next month.

IrishCycle.com understands that 12 options for the project have been narrowed down to 4 options — these are expected to be presented to Dublin City Council commities this month, including the traffic and transport commitie, which is due to take place next Wednesday.
…
One of a number of options for a two-way cycle route on the north quays is seen as the most feasible route design due a number of issues, including more daylight on the north quays and major pinch points on the south quays which cannot be bypassed.

An insight into the details of the cycle route was given last October when an outline of the plan to extend the Croppies Acre memorial park, at the front of Collins Barracks, out onto the riverside. The plan would allow for a car-free public park at the river side and two-way walking and cycle route along a central section of the north quays. That outline shows how buses could be moved off the north quays between Parkgate Street and Church Street.

Details of Liffey Cycle route set to be made public (irishcycle.com)

14 thoughts on “Do You Cycle Along The Liffey?”