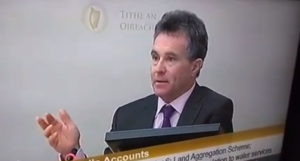 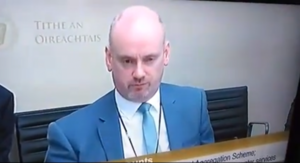 From top: Fianna Fáil TD Seán Fleming and Secretary General of the Department of the Environment, John McCarthy, at a Public Accounts Committee meeting yesterday

Senior officials from the Department of Environment, including secretary general of the department, John McCarthy, were before the Public Accounts Committee yesterday.

During the officials’ appearance, the matter of motor tax being used to fund Irish Water was addressed and it was confirmed that €439million of local government funds was paid to Irish Water last year – two-thirds of which came from motor tax.

This year Irish Water is expected to get €399million and next year, €479million.

John McGuinness: “And the resources of the Government fund are used mainly to provide local authorities for their funding for their day-to-day activities and for the upkeep of regional and local roads.”

McGuinness: “And I’m just saying the shift in that, then in 2014, was the taking of this €439million of subvention to go to Irish Water. Which is incredible.”

Sean Fleming: “Are we right in saying that that local government fund, just to keep the figures in round figures, about €1.5billion went into it, approximately.”

Fleming: “Approximately €1billion was motor tax, two-thirds of it. So it’s fair to say two-thirds of the €439billion that went to Irish Water went from motor tax?”

McCarthy: “Which would have formerly been part of the general purpose grant to local authorities as part of their funding of…”

McGuinness: “The county councils are starved of money to fill the potholes on country roads.”

Fleming: “We’ve three sources of funds now to, paying for Irish…the Irish taxpayer is being asked to pay taxation goes for the water services, as you have it, the central fund. That’s money received from taxation. They’re going to get money from motor tax – two-thirds of that €400 – €250million of that at least – has come from motor tax. And now we’re also saying something, maybe smaller than that, is going to come through the water rates, through the bills they receive from Irish Water. Like people understood, had a problem paying on the double for their water services, having paid their taxes and now paying for water rates. But if they actually knew you’re going to be paid on the treble, because your motor tax is also going to pay for Irish Water. Is it…”

McCarthy: “It’s the operating subvention to Irish Water is, in general terms, it comes out of taxation. The vehicle that is used for it, if you’ll pardon the pun, is the…em.”

59 thoughts on “Paying On The Treble”