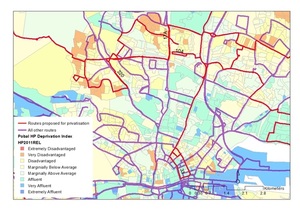 A privatised route will have to generate income and to do so can only increase fares and / or lower wages. We have seen this for refuse collection since 2001. Taking the city as a whole, the private tendering of these ‘orbital’ routes is a testing ground for more extensive privatisation on other, more lucrative, routes in the years to come.

A private operator is not going to want to compete on one route but on many across the entire network. If a route is operated by a profit-driven company, the license to service the route will need to stipulate the regularity of the service. A route that runs at peak times only and does not operate outside of this peak defies categorisation as a social good.

Ours fears for privatisation is that there will be a focus on running a bus only on that exact slot in the schedule that will be busy. There is little assessment of the route within the system as a whole. Having operated a route for perhaps two years, private operators will be back at the minister’s office door arguing for access to these more lucrative routes.

Privatizing public transport from the periphery to the centre?

Look Before You Leap