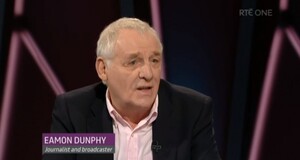 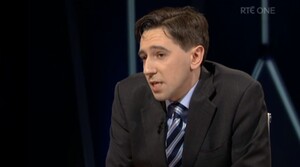 Eamon Dunphy, Fine Gael TD Simon Harris and Paul Murphy TD were among the guests on Claire Byrne LIve on RTÉ One to discuss ‘political policing’ and a French-style social model for the Irish economy.

Simon Harris: “…We often have this debate in Irish media and indeed in Irish politics, Ireland, is it like this country, or Ireland is it like that country? We need to look at each country on its merits. This country now has a scenario where we’ve seen jobs growing. And jobs growing by the way, sometimes is a bit of an abstract comment.
I notice that Eamon [Dunphy] said, ‘oh Enda Kenny, he just wants to make this country the best country in the world with which to do business, but what about making it the best country in the world in which to live’.  But one leads to the other, if you don’t actually fix the economy. Now, don’t laugh, because it’s important, Eamon, it’s important for people who do live here in this country, if you don’t actually have a functioning economy, you can’t deliver the services that those women quite correctly talk about.
You’re right in relation to childcare. We didn’t get it right in this country thought during the years of the boom, we didn’t get it right during the Celtic Tiger. We saw children’s allowance go up we did see the introduction of the free pre-school year. The challenge for us now, as the economy recovers, is to finally get it right and actually be able to sustain a recovery, that’s what we’ve got to do.”

Claire Byrne: “Okay. If you’re a business owner in France you’re paying 45% on your profits, where as here you’re paying 12 and a half %. Now a lot of that money is going in France to pay for the services you know and it means that families don’t have to pay extortionate rates to go see the doctor and so on.”

Byrne: “Okay Eamon, now, good news, Eamon, in Ireland and France is not as pretty a picture as you made it look…”

Eamon Dunphy: “One of the things that Simon said, very contradictory, he said that if you don’t have a functioning economy you can’t provide the services that are in France but just before that he said that France didn’t have a functioning economy, and couldn’t meet its EU commitments. What happened with the €50 billion paid, they’re not going to do it, they’ve refused to abide by the 3% GDP to debt ratio.”

Harris: “They’re not the President of France has opposed…”

Dunphy: “You’re wrong on the facts and your argument is confused.

Harris: “Eamon I attended a Euro… Right, shout me down now.”

Dunphy: “You’re telling me the people who don’t have child care, who don’t have access to the health services that this is a functioning economy, that this is the model, I’m suggesting that the French model is a social model, that there’s more solidarity, that there’s more access to the things that really matter health care child care and help when you fall on hard times. The French are resisting the ECB because they don’t want to destroy the society that they have and all its benefits which you have seen.”

Byrne: “All right, quick response, Simon, then Sinead we’ll come to you.”

Harris: “Eamon had a six and a half minute video. The French president, the French president, as opposed to Eamon, has said that he’s committed to installing €50 billion worth of cuts between 2015 and 2017, he’s the French President, I’m going to take his word. You’re right that they haven’t met their targets, we have met our targets, it’s important to meet your targets in a stable economy. You described this country on the Late Late Show in 2012 as a dump, you said you weren’t very proud to be an Irish man, even worse. I don’t believe it is a dump, I believe there are things we need to do a lot better, an awful lot better, I’m not going to sit here and suggest everything is wonderful, but if we’re going to come up with solutions you’ve got to pay for things the way you pay for things is by creating jobs it creates more tax and reduces the cost of social protection and you can invest that in the country.”

Dunphy: “Well let me ask you a simple question then, when do you envisage we’ll have the kind of society they have in France?”

Harris: “But I’m not sure we want everything that they have in France.”

Byrne: “We want their good stuff.”

Harris: “But we certainly want an improved child care system and Minister Reilly has already put in place a group to report to him by the summer and this isn’t just a group for the sake of a group… Don’t sneer at me.”

Dunphy: “C’mon, is that the same Minister Reilly who was going to fix the health service?”

Paul Murphy TD: “People want taxes to be fair, which means taxes on income, taxes on wealth, taxes on profits, I didn’t see six Gardai going to the homes of any of the three hundred Irish people who have tax accounts, who have bank accounts in Switzerland to avoid taxes…”

Harris: “This isn’t the national broadcaster being used for you to advance your view on an ongoing criminal investigation, this is a discussion about the tax system and how our tax system compares to the tax system in Europe.”

Byrne: “Can I ask you Simon actually, do you want to respond to the earlier allegation that Paul made that what happened to him this morning was political policing?”

Harris: “I want to be very careful with what I say Claire, because I think, firstly, it is an ongoing criminal investigation and I don’t think anyone is making any political points out of this other than Paul.”

Murphy: “Did you know the police were going to my house?”

Harris: “Of course I didn’t know.”

Murphy: “Did Frances Fitzgerald know? Did the Minister for Justice know?”

Harris: “Of course she didn’t.”

Murphy: “And the Garda Commissioner?”

Dunphy: “Hang on a minute, hang on a minute, I want to say, I want to say that smacked of a stunt this morning and it’s a sinister development. What happened to Claire Daly when she was taken out of her car late at night, put in handcuffs, her story was leaked, no hold on, this was under your government’s watch…”

Dunphy: “Well we had a man here Bill Black last week, an American. He’s an American regulator. Regulator with vast experience of the savings and loan crisis and how America dealt with that and he said the night of the bank guarantee it was the biggest own goal in history. So we have burnt a lot of money, and it isn’t just the present government but the previous government as well, the Labour Party, the Green Party, the PDs, all of these people are implicated, our political class are implicated in that disastrous decision.
But we should be standing up for ourselves, we need to, the French have refused the ECB, they’ve said they will not pay that back until 2017, the Greeks are refusing now and I’m not a socialist, far from being a socialist or a communist, but I think like most people, I admire their spirit, I admire the fact they’re standing up to the European Project which is becoming more sinister and unfriendly to its citizens by the day, there are 25 million people unemployed in Europe, youth unemployment in Spain is 70% , the Spanish are likely to elect a government like Syriza in the forthcoming election, we want our government to stand up for our people…”

Harris: “And have you seen what we’re doing Eamon, when you’re not describing the country as a kip or walking through wine cellars as you were on your promos…”

Dunphy: “Do you mind not engaging in personal insults? Please? You called me a rabble rouser.”

Harris: “I didn’t know you were such a sensitive soul Eamon You’re well able to dish it out and you’ve criticised success ever since Jack Charlton was a manager of the Irish soccer team.”

Dunphy: “Who gave you your briefing notes tonight?”

Harris: “No, no, Eamon, I’ve watched you for a long time Eamon and you’re sitting here tonight portraying yourself as a neutral political commenter. You’ve said already on radio stations that you’re a Sinn Féin supporter, you’ve said you’ve voted for Sinn Féin, as is your right in a democracy. But don’t pretend you’re a neutral observer here. You talk about youth unemployment, have you heard about youth unemployment have you seen the 80,000 jobs we…”

Harris: “We reduced income tax in the last budget, not by a massive amount but for the first time in several years. How then was income tax take up in January from last year if actually more people weren’t in employment. I’m going to ask you about that.”

Byrne: “All right Simon, thank you.”

Justice For The Delayed

No Way, We Won’t Pay

35 thoughts on “What’s Another Sneer?”