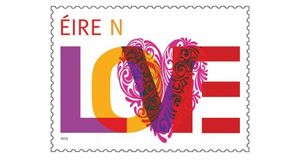 Ireland’s State-run postal service An Post has denied that a stamp produced for Valentine’s Day is intended to back a Yes vote in the forthcoming same-sex marriage referendum. According to The Irish Catholic newspaper, the latest stamp, employing the word ‘LOVE’ in multi-coloured lettering, also includes, as part of the red letter ‘E’ an equals sign, an internationally recognised symbol for support of gay marriage.