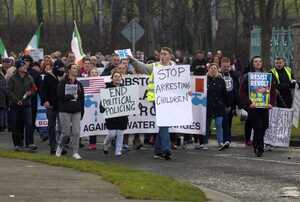 A march to to protest against the arrests of Water protesters and the water charges.

Hundreds of people gathered in Jobstown and Tallaght Village before marching to Tallaght Garda Station and on to the Civic Theatre for a rally.

In the last week , 20 people, including two teenage boys, have been arrested in connection with the water protest in Jobstown last November.

Earlier: Journalism And The State 20 thoughts on “Meanwhile, In Tallaght”