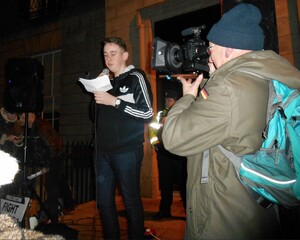 Jason Lester outside the Department of Justice on Thursday night

I was really impressed by the boy [Jason Lester] who spoke last week after the irish Water  arrests. So I made a transcript…

‘On Tuesday morning I was awoken to a loud banging on my mam and dad’s front door. My mam and dad went down to discover 10 gardaí – nine detectives and one uniformed garda. The next thing I knew they were standing in my bedroom, arresting me under Section 4 of the Criminal Justice Act.

It went on very quick from there. I remember being taken out to a detective car and my mam being followed behind in another detective car. It was then, I was then taken to Tallaght Garda Station and put into police custody.

I was made sign various forms and then I was put into a prison cell. That experience alone for me was distressing. I felt sick in the cell. I’d never been through an experience like that in my life before.

While I should have been in school I was sitting in a prison cell down in Tallaght Garda Station and Joan Burton, if you think that’s going to shut me up, it’s not.’m going to be protesting stronger than ever before now.

The guards put me through over two hours of questioning from various videos from the day in Jobstown and they said to me, ‘we have to put it to you, Jason Lester, that you were the ringleader or the organiser of that protest’.

My reply was simply, ‘no comment’ to anything they asked.

People keep on asking me, ‘you’re only a lad of 16. Why – sorry now for cursing – why do you give a shit about water charges? Your mam and dad have to pay them?’

…Throughout the interview as well, I saw things and I asked the guards, ‘where did this footage come from?’ and they told me, CCTV cameras at An Cosán [college] and RTE supplied footage as well of some of the protesters.”

And if they want to do me on false arrest of Joan Burton, well I tell you something. They came and took me, a 16-year-old out of my bed and put me in a prison cell. Who got falsely arrested? you tell me.”