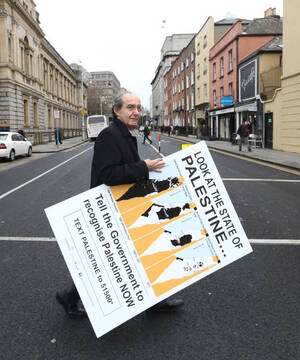 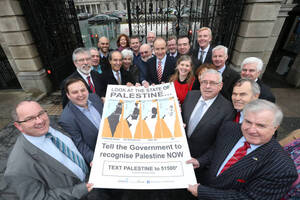 Palestinian Ambassador to Ireland, Ahmed Abdelrazek (top) and cross party supporters of efforts to gain international recognition of the State of  Palestine at Leinster House.

Politicians and trade union leaders, including Micheal Martin , Gerry Adams  and President of the Irish Congress of Trade Unions John Douglas, joined the Palestinian Ambassador to Ireland, Ahmed Abdelrazek and Sakaka – the Ireland Palestine Alliance at Leinster House today to urge the Irish Government to immediately implement the Dail and Seanad motions to recognise the state of Palestine on 1967 borders, with East Jerusalem as its capital.

19 thoughts on “Behind You”