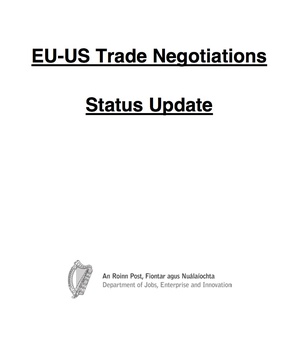 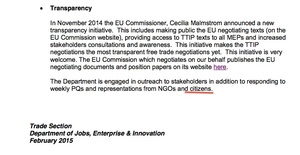 Don’t let them ‘trade away our sovereignty’.

For any broadsheet readers who mightn’t have heard about TTIP  [Transatlantic Trade and Investment Partnership] – its a trade agreement between EU and US – there are big concerns about its effect on lots of things but in particular, a clause within it that allows corporate entities to sue state governments for loss of earnings.

Example’s of this clause already occurring in America include Monsanto suing the state of Vermont for requiring GM foods to be labelled or to bring it closer to home – the threat by big tobacco to sue Ireland for loss of earnings due to blank packaging.

The doc [link below] does state the EU negotiations give an ‘opportunity’ to address concerns raised by citizens. There have been eight rounds of negotiations to date. The 9th round is scheduled for 20th – 24th April 2015.

I thought maybe your readers would like to know a bit more about it. There are lots of people taking action to try and stop some of the worst parts of this agreement slipping through the net if anyone out there wants to get active.

Forcing The ‘Privatisation Of Irish Water’

None Of Your TTIP