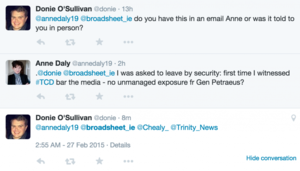 David Petraeus, former Director of the CIA and retired four-star general in the US Military, spoke at The Phil in Trinity yesterday and it’s been claimed that the media were barred from the event.

David Petraeus, Former Director of the CIA, Speaks to The Phil (Facebook) 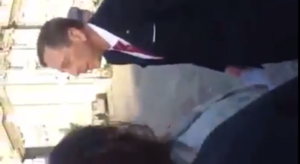 “So I tried to have a chat with former Director of the CIA and retired four-star General of the US Army David Petraeus today in Trinity College. Dave was there to pick up an award from the University Philosphical Society (presumably Petraeus has some deep philosophical insights to share about killing millions of people).

“I had hoped to gain entry to the event but as fate would have it, I bumped into him before the event as he was being given a tour of the campus. I managed to garble out a few poorly phrased points/questions (Afghans not Afghanis duh) in defence of the people of the Middle East and beyond, in memory of the people whose deaths this man is responsible for. I didn’t get to say much at all really before I was dragged away (literally) by security who should be thankful I was in an agreeable mood.”

“After being detained for an hour or so, and having pointed out to security and Gardaí that I was merely trying to ask the man some questions, that I maintained a distance from him, and that if I was to be charged with trespassing, surely every tourist there taking a video or photo should be subject to the same charge, they let me go.”

“I was allowed to go without charge on the condition that I delete the video. I did. However, mysteriously, here it is.”

Seann William Scott At The Phil

Where Are The Journalists?

35 thoughts on “Inside Job”