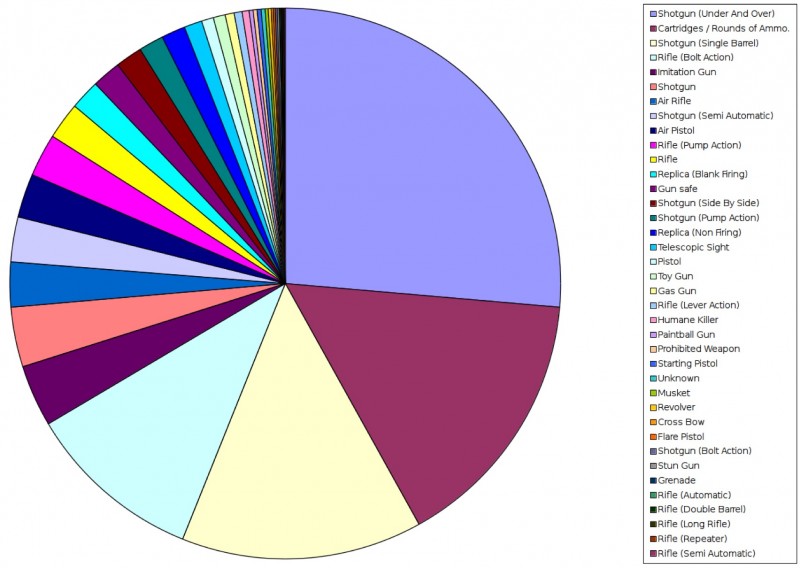 So… remember those 1700 firearms that were listed by the Gardai as having been stolen from 2010 to 2014 in all the tabloids of late?  Interesting written question in the Dail on Tuesday this week, saw an infodump of raw data from PULSE regarding those.

Some interesting questions pop up. Why is there a fully automatic rifle listed, when only Gardai and the Defence Forces can own them? Was one stolen from the Gardai in the Eastern Dublin Metropolitan Region in 2011? Why are there 54 replicas listed as real firearms when they can’t shoot bullets? Why are there 266 rounds of ammunition listed as individual firearms in the numbers? Why were 18 telescopes listed as individual firearms? Why are there 29 gun safes, 62 imitation guns and 12 toy guns listed as firearms when under the Firearms Act, those three categories are not legally firearms even within the enormously wide definition of that term in Irish law?

And did anyone think to tell the media that those figures were a wee bit misleading? I don’t remember too many firearms licences being issued for grenades, for example, but there’s one in there. Was a grenade stolen from the Army in Tipperary in 2010?

I’ll be the first to admit that the number of what we think of “guns” that have been stolen is a cause for concern (though strangely, none of proposals the Gardai have made recently have addressed minimum security standards at all). But these figures, they’re… well, they raise some rather pointy questions about the quality of the data in PULSE, and it’s that data that the Gardai are basing their proposals on, and that raises questions over the proposals as well, obviously.  Actually, now that I think about it, those 266 rounds of ammunition – the second largest chunk in the pie – are also not legally firearms even under our hilariously wide definition of “firearm”…