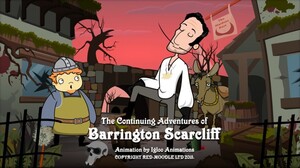 This is a new show that we are developing (co-production) with another company in England, RED-moodle. The show is titled ‘The Continuing Adventures of Barrington Scarcliff’ and is aimed at anyone over 15 with a twisted sense of humor. It’s written by Jonathon and Richard Morss from Red-Moodle and we are doing the Animation. It is being made into 13x24 minute episodes. Above is is the first animated clip from the show used to introduce the main character and setting….

Clump! There It Is

3 thoughts on “Scarcliff For You”