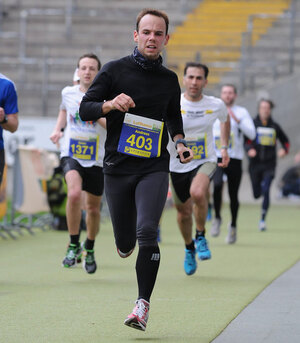 Andreas Lubitz competing in a Lufthansa marathon in 2013

…To conclude that his [Andreas Lubitz]  role in the [Germanwings] crash was the automatic consequence of any history of mental illness would be irresponsible and damaging. There has been no suggestion that males should be prohibited from becoming pilots, that Germans are unfit to fly, or that 27-year-olds should not be let loose in the cockpit. Only one factor has been picked over: Lubitz’s mental health.

The truth is that people with depression are all around us – they are our teachers and solicitors; our plumbers and health professionals. Data obtained following a recent freedom of information request revealed that more than 40,000 NHS staff took sick leave as a result of stress, anxiety and depression in 2014. Up to 20% of those are likely to be medical doctors; indeed, doctors are significantly more likely to experience depression than the general population. Having depression does not necessarily make you unfit to work, but, based upon the headlines in many of today’s papers you could be forgiven for thinking that it does.