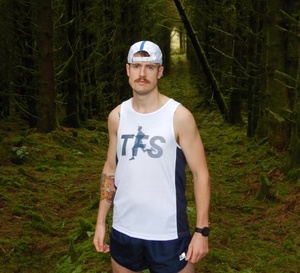 Glanmire native Conor O’Keeffe has battled depression and says he feels like a weight has been lifted during his recovery.

Now he will attempt the impossible by running 32 marathons in 32 counties… in 32 days.

He’s also going to carry 32 pound weights on his back and remove one per day as a symbol of how he overcame his situation….

Me Head is Wrecked with Tony Kelly

The first episode is me telling my own story about my recovery from depression and prescription drug addiction.

Emily O’Callaghan was the guest host for the episode as she had interviewed me previously on her own “Green Rebel Podcast”, which you guys wrote a lovely piece about.

It has been amazingly well received, I have been inundated with messages, emails, DMS etc from people sharing their stories with me and saying how it spoke to them.

Me Head Is Wrecked With Tony Kelly An unsettling short (based on director Kilian Vilim’s own experience of mental breakdown) wherein a young elevator operator’s loneliness leads him toward a sinister self-discovery.

The programme has been developed as a response to the significant numbers of patients, particularly young men in rural areas, accessing the videoDoc service seeking help with mental health related concerns.

The online therapy service will be overseen by Jason Brennan, a qualified psychotherapist and counsellor with over 20 years of experience.

Jason is well known in Ireland having co-authored, with Brent Pope, a best selling book featuring strategies to cope with various mental health issues at home, at work and in sport. They SHOULD tell you, but don’t because it’s hard to market nightmares. You Jung Han, 36, from South Korea, was found dead in the Kinsale Road direct provision centre on Tuesday night.

She was the mother of a six-year-old boy who is now in care.

This is You Jung Han… the lady whose life was cut short by the shortfalls of the system of direct provision leaving behind a 6-year-old boy. How you may ask? The system pushed her to a depressed state and she took her own life by hanging herself.

She is not alone in that state, a lot of people are wallowing in depression in different centres. Do we sit down and continue to watch while more incidents like this reoccur? Or do we pick up our voice and raise awareness to what is really happening to people behind the scenes of DP.

Masi believes that what affects one affects all… asylum seekers voices needs to be heard. WE ARE HUMANS TOO. Our heart goes out to the little boy… what does the future hold for him now? May You rest in peace.

Meanwhile, following You’s death, RTÉ journalist Brian O’Connell spoke to residents of the Kinsale Road accommodation centre for an item on the Today with Sean O’Rourke show this morning.

“She lived in the same block as me, lovely lady, was very private and didn’t choose to mingle with people. It was obvious that she had issues and… chose to remain private about them.”

After she was asked if she felt You should have been in direct provision, she said:

In a statement to Mr O’Connell, the Department of Justice said:

“Unfortunately this is the second time that such a tragic event has occurred since 2002.”

Previously: Death Of A Mother Pictograms scrawled on walls by homeless wanderers and migrant workers for the benefit (and wellbeing) of fellow travellers during the Great Depression in the US. Before You Push The Chair.

By Stephen Murphy, who writes:

The truth of it is that I’ve spent a large part of the past 20 years bitten by the black dog, but I think more people have than will ever let on, but much of the time is spent ‘keeping the best side out’. The days of either being mad or sane are thankfully over, & if we sat down for a chat we’d probably find that we’re only as mad as each other.

I don’t expect many people to watch this to be honest, nor does it matter one way or another. My only hope is that it might find its way to somebody in the darkness, and possibly bring them some bit of light along the way.

Thanks Dublin Says No Trevor Murtagh was the only child of Seamus and Carole Murtagh of Dundalk, Co Louth.

A busy political activist and writer, Trevor graduated from Trinity College Dublin with a masters degree in Psychoanalytical Studies.

He took his own life the day after his 29th birthday.

In Village magazine, where Trevor interned, Trevor’s cousin Jon-Paul Faulkner documents the family’s struggle to get him help in a system that made things worse.

I was living up in Dublin. Trevor was at home in Louth. We were close cousins who had lived next door to each other our whole lives – he was my brother really, to be honest. Trevor, apart from my Mum, was the closest person in my life, he was my family.

Whenever I felt down, I’d be really quiet; Trevor was the opposite: he could always talk ‘til the cows came home and was really outgoing. This made me think that Trevor was happy.

He had changed a little since he had had a bout of depression in 2011, just after he finished his Master’s in Psychology. His family and friends knew about it. He was still Trevor, positive and outgoing, but when we’d go socialising he would sometimes be more hyperactive than usual, talking non-stop, but still so, so much energy, so outgoing, clever, and apparently happy.

I got a phone call from his parents to say Trevor had been admitted to hospital. His friends had found a suicide note crumpled up in a basket and he had been hospitalised. I couldn’t believe it. It came as a complete shock.

I had seen him the previous weekend, and he seemed ok, though not his usual cheerful self, certainly a bit quieter than usual. Trevor was admitted to hospital on 20 June 2014 and was discharged nine weeks later on 22 August.

It took me a long time to write this, mainly because we wanted to wait until Trevor’s inquest before telling our story, and that didn’t happen until 3 November 2015, but also because, going through in detail what happened to Trevor during his stay in hospital is so, so painful for me: I don’t want to remember him that way.

I think of Trevor from the moment I wake up to when I lie in bed at night, but I try to remember the real Trevor, the happy one – of those memories I have so many. The perverse images of Trevor, once so full of life, lying in a coffin, these memories come to me and I struggle to push them away and think of happier times.

Trevor’s family, and particularly his Mum, Carole, struggled in vain to get help for her only child. We thought we were lucky that Trevor was actually admitted to a psychiatric hospital, but unfortunately we were not lucky with a minority of his healthcare professionals, including his head consultant. His mental health actually deteriorated during his stay in hospital.

When I came in to the hospital that evening of 20 June it broke my heart. It was surreal; Trevor wasn’t Trevor, he was manic, he was so distressed, he kept rubbing his fist against the side of his head, “there’s nothing, there’s nothing in here”, he was saying. “I’m nothing”. It didn’t make sense, Trevor thought he had nothing in his head, nothing to say, the guy could talk for two hours straight about most topics, he was an intelligent guy! He was also saying he had no friends, yet Trevor had such a huge number of friends, and they were ‘real’ friends, they all really loved him, and they were from all walks of life.

But I was wrong, and it didn’t take long to realise it.

(continued at link below)

Trevor Was A Scholar And Environmental Campaigner (Obituary, Independent.ie)