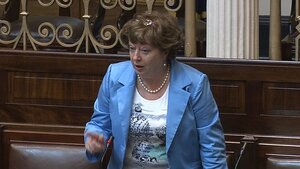 You may recall how Catherine Murphy, Independent TD for North Kildare, has been asking questions of Finance Minister Michael Noonan in the Dáil about IBRC’s sale of Siteserv to Denis O’Brien.

The sale involved IBRC writing off €100million of Siteserv’s debt with €5million distributed to Siteserv’s shareholders.

After the sale of Siteserv to Mr O’Brien, GMC Sierra won a State contract to install water meters. GMC Sierra is comprised of GMC Utilities Group and Sierra Support Services Group. Sierra is a subsidiary of Siteserv.

It was previously reported that Australian hedge fund Anchorage Capital offered a higher price – €52million – but that ‘elements of the offer were considered less attractive then the O’Brien bid’.

Last December, Ms Murphy raised her concerns about GMC Sierra’s water meter contract, in the Dáil, asking how could GMC Sierra be awarded a contract [by former Environment Minister Phil Hogan] for water meters even though it didn’t legally come into existence until July 15, 2013, 15 days after the closing date for bids.

In another question, Ms Murphy asked Minister Noonan to furnish her with the so-called Relationship Framework and Operational Protocol which oversaw the interactions between the Finance Minister and the former management and board [headed by Alan Dukes, former Fine Gael leader] of IBRC before it was liquidated.

In a reply on February 26 last, Minister Noonan confirmed to Ms Murphy that the bank would consult with the minister in relation to “any transaction which resulted in an adverse impact on total regulatory capital of the bank of greater than €100million would require interaction between the minister and the IBRC”.

In a reply, Minister Noonan stated that the protocol only came into effect on March 29, 2012 – 14 days after the Siteserv sale was completed.

Yesterday, Ms Murphy received three more answers from Minister Noonan in relation to records kept of meetings between Minister Noonan and IBRC in respect of the Siteserv sale; if IBRC extended a €10million credit facility to Siteserv between 2010 and its sale in 2012; and about IBRC’s reported rejection of a higher offer for Siteserv.

In his responses, Minister Noonan said the file notes, minutes and other records regarding his meetings with IBRC are currently the subject of Freedom of Information requests and will be released in due course.

As for the €10million credit facility, he said it wouldn’t have been typical for decisions around credit facilities to be disclosed or discussed with Department of Finance officials.

Minister Noonan also said minutes and records pertaining to these meetings are subject to Freedom of Information requests and will be made available upon their release.

However, here is a more detailed account of Ms Murphy’s questions and answers…

“Until those decisions are made by the Deciding Officer, I can confirm that at the meeting which I attended on 25 July 2012, it was put to senior management of IBRC that officials in my Department had concerns with a number of decisions taken by IBRC in relation to the sale of the company referred to in the question including the decision to allow the sale process to be led by advisors of the company referred to in the question, the decision to exclude trade buyers, the timing of exclusivity and the payment to shareholders. Senior management of IBRC confirmed to me at this meeting that the transaction involving the company referred to in the question was thoroughly assessed by the Board of IBRC prior to them approving it and that the transaction was managed in the best manner possible to achieve the best result for the State.”

Secondly, Ms Murphy asked Minister Noonan if IBRC extended a €10million credit facility to Siteserv between 2010 and its sale in 2012; if he’d confirm that all due diligence procedures were followed in advance of the forwarding of this line of credit; and if the €10 million or outstanding portion thereof was specifically recovered through the sale of Siteserv or if the money was written down entirely.

“In relation to the Deputy’s query on a €10 million credit facility extended to the company referred to in the question between 2010 and the sale of the company in 2012, I am advised that it would not have been typical for decisions around credit facilities to be disclosed or discussed with Department of Finance officials unless required under the Relationship Framework which governed interactions between the Bank and the Department of Finance as these activities typically would have been within the ordinary course of business for the Bank.”

“Officials in my Department have also contacted the Special Liquidators but they are unable to comment on individual cases as the information requested is confidential and it would not be appropriate for them to release such information. This being the case, I am unable to comment further on this matter.”

Finally, Ms Murphy asked Minister Noonan, if he’d confirm the media reports that IBRC had turned down a higher offer for Siteserv because one element of that proposal included a mandatory eight-week due diligence exercise.

She also asked if Minister Noonan was aware that if IBRC had chosen this reported bid, the new framework agreement would have been in place once the said eight-week period had expired. She then asked if he felt the sale of Siteserv was rushed and, if so, why.

In his response, Minister Noonan said:

“As part of parliamentary question 97 which was answered on 12 March 2015, the Deputy is aware of the process which was undertaken to introduce a revised Relationship Framework for IBRC and the reasons behind this.”

“In light of concerns stemming from the review of the transaction by officials in my Department, I subsequently met with IBRC’s Chairman [Alan Dukes] and CEO to discuss this transaction. The Chairman and CEO confirmed to me that the transaction process and its terms had been thoroughly assessed by the IBRC Board and that the transaction was managed in the best manner possible to achieve the best result for the State.”