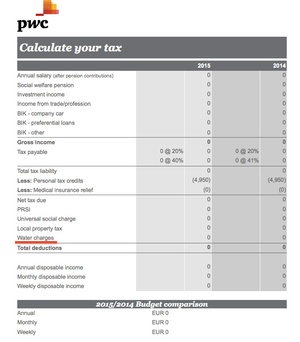 Did PWC have anything to do with Irish Water or DO’B/Siteserv deal? Do they know something the rest of us don’t? It seems to think water will be deducted at source if their on-line tax calculator is anything to go by… it was not present a few weeks ago.

in 2011, PricewaterhouseCoopers and McCann Fitzgerald were tasked with carrying out a report on the setting up of Irish Water.

In April 2012, former Environment Minister Phil Hogan spoke about the decision to award the Irish Water tender to Bord Gáis, rather than Bord na Móna, saying “the outside assessors, PricewaterhouseCoopers, had made the decision based on a long list of criteria”.

In January 2014, it was revealed that former Environment Minister Phil Hogan’s department paid €179,584 paid to PricewaterhouseCoopers for “consultancy services” on the establishment of Irish Water.

And in a statement issued earlier this month, Siteserv stated:

You may recall former CEO of Bord Gáis John Mullins stepped down from his role in December 2012, and later replaced by Michael McNicholas.

Mr Mullins was appointed as non-executive chairman of Heneghan PR earlier this month.

Heneghan PR – which does  PR for Siteserv – is headed by Nigel Heneghan, advisor to Leslie Buckley, spokesman for INM and, most recently, a member of the compliance committee of the Broadcasting Authority of Ireland, a position he was appointed to by the Government, without any public recruitment process.

For Legal Reasons, The PWC Email Guys On The Cover Of Today’s Irish Daily Mail Have Been Disguised

Gone To The Dogs

19 thoughts on “Nothing To PwC Here”