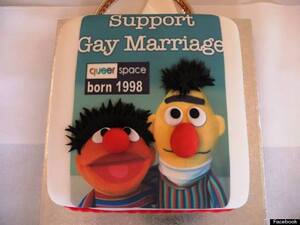 District Judge Isobel Brownlie told Belfast County Court she wanted to give full consideration to the evidence which was presented over three days.
The judge said: “It is not a straightforward area of the law.Obviously this is a case in which I propose to reserve my judgement.”
The Equality Commission for Northern Ireland took the case against Ashers Bakery on behalf of the gay rights activist whose cake order was refused. Ashers is run by the McArthur family, declined the request for a cake with an image of Sesame Street puppets Bert and Ernie below the motto Support Gay Marriage. It had been ordered for a private function marking International Day Against Homophobia last May.

54 thoughts on “Settle Before Icing”