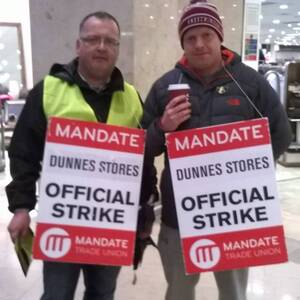 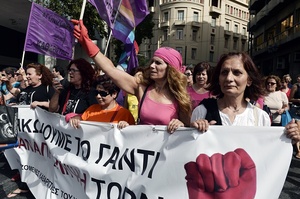 Tony Malone (top right with his Mandate union rep John Callan), who was sacked by Dunnes in Dundalk after he went on strike, and (above) laid-off cleaning staff from the Ministry of Finance protesting in Athens, Greece in 2013

What connects The Dunnes Stores workers and the 600 women cleaners who were employed by the Ministry of Finance in Greece but fired in 2013 due to austerity?

The sanction has been swift. Immediately after the one-day strike at Dunnes, Margaret Heffernan [Dunnes Stores CEO] targeted a number of workers “from all over the country” to punish them for participating in the strike.

One striker, Tony Malone, was fired the day after the work stoppage took place. Reports indicate that he’s not the only one and that many others have had their hours cut or their position changed. Mandate, the workers’ union, is now seeking legal advice on how to go about rectifying the situation.

When their privileges are challenged, the powerful retaliate swiftly and forcefully to send a message to people elsewhere who could get similar ideas. The Arab Spring and the Occupy Wall Street movement show that progressive ideas can spread rapidly.

This is one reason why Greece under Syriza is so demonized by the troika. Elites know very well that similar challenges are growing in other countries, most notably Spain, but also here, through movements like the water charges protests.

Related, we often hear that the European economic crisis is a result of Germany oppressing weaker countries like Ireland and Greece to teach them a lesson for others to see. There is truth in that, but it is misleading to pitch “the Germans” against “the Irish,” because every country is divided into a minority of elites and a majority of ordinary people.

It is more accurate to say that all elites – German, Irish, Spanish, etc.—share very similar goals against ordinary Europeans. That’s why the Irish government has been as happy as the German one and the troika to implement austerity here. It is also why when Syriza came to power, Greek, German, Spanish and Irish elites were all very upset, and still are.

We thus find struggles by ordinary people against austerity throughout Europe that are very similar to that of the Dunnes workers. For example, in Greece, there is the well-known case of the 600 women cleaners employed by the Ministry of Finance who were fired in 2013 due to austerity policies. Syriza promised to re-hire them if elected and the negotiation process is ongoing in order to establish the terms under which they would be given their jobs back.

After learning they had been fired, the women held regular peaceful protests in Athens, chanting slogans at the gates of Finance Ministry. The police was sent to deal with them. Amnesty International reported that they were left “beaten and bruised” by riot police.

The police hit the women with their shields and kicked them and some had to be taken to the hospital. One woman reportedly had her leg fractured. Amnesty International said that “the culture of impunity among the ranks of the Greek police is so deeply ingrained that officers believe they can get away with such flagrant human rights violations—and they often do.”

The media won’t highlight those similarities as obvious grounds for cross-border solidarity. Rather, they will play up nationalist feelings to try to rally people behind their own governments and elites. And they will, of course, repeat ad nauseam that austerity is a great thing and that There Is No Alternative, as I have shown in my recent book on the subject.

Actually, Pat Leahy, the Deputy Editor of the Sunday Business Post, seems to agree with my conclusion about the media’s coverage of austerity. In a column published yesterday on the subject of media bias, he states that his view is that the Irish “media’s attitude to austerity has been to favour it in general terms,” although opposition to particular policies often appears. Exactly what my book says.

Some in the media have tried to defend Dunnes Stores against its workers. Richard Curran wrote in the pages of the Irish Independent an article entitled “Businesses Should not be Vilified over Workers’ Casual Contracts.”

He says that “the easy narrative is that companies are increasingly exploiting workers in order to make ever-larger profits,” but according to him, the “reality isn’t that simple.” This is because some workers at Dunnes are happy with the hours they have, and after all, “there is nothing unfair in these [zero-hour] contracts,” as “it is how they are applied that causes problems.” Also, in the age of globalisation, “many companies themselves are in a less secure and more precarious position” and they could “find their entire business model undermined by competition.”

This is throwing ifs and buts out there to confuse a situation that is crystal clear: Dunnes workers are not treated fairly, and their employer is responsible. Splitting hairs until issues are blurred is a standard mass media tactic. And yes, there is international competition that leads businesses to cut labour costs—but that’s the problem, not an excuse for what is happening.

To cut through the spin, just look at this recent survey of 1,200 Dunnes workers that revealed that:

International solidarity would help those workers as much as it would help the Greek cleaning women. But solidarity is arguably even more important within Ireland. Irish trade unions should cooperate to a greater extent to support workers facing difficulties in various economic sectors, public or private.

In other words, unions should be about social change, not just about the relatively narrow issue of salaries for their own members. Moreover, as many of us as possible should support Dunnes workers, because ultimately we all win when work norms are improved in any given economic sector.

Perhaps a slogan could be: People of Ireland, unite. You have nothing to lose but Margaret Heffernan.

Pics: Talk Of The Town, via Irish Times and Getty

‘Everybody Needs A Bit Of Stability’

36 thoughts on “Mercille On Monday”