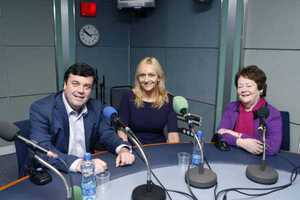 You’ll recall how, in January, Central Bank governor Professor Patrick Honohan told the banking inquiry that the late Brian Lenihan, then finance minister, was overruled by a senior politician on the night of the bank guarantee in September 2008.

He said he understood Mr Lenihan thought that Irish Nationwide Building Society and Anglo Irish Bank should have been nationalised.

At the weekend, the Irish Times reported that former Taoiseach Brian Cowen said there was no question that he overruled Mr Lenihan.

Further to this, RTÉ reports:

Former Fianna Fáil minister Mary O’Rourke has confirmed the family of the late Brian Lenihan has requested input into the Oireachtas Banking Inquiry.”

“Speaking on RTÉ’s Morning Ireland, Ms O’Rourke said it is a fact of life that one of the main figures in the committee’s deliberations who cannot be with them is her nephew, the late Mr Lenihan.”

She says it has struck her forcibly “that those to whom he may have confided in on some matters should be given a chance to come before the committee to speak their mind.”

“We wish to put the committee under notice that we will be following events and listening to what the witnesses will be saying internally about the late Brian Lenihan and we wish, if necessary, to render the recommendations of the committee more complete.”

Previously: “They Bought Into It”

Don’t Hate Him Because He’s Beautiful