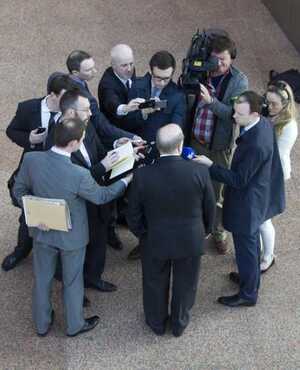 Minister for Finance Michael Noonan at the Convention centre, Dublin this morning for a Ireland Strategic Investment Fund event overshadowed by questions over the Denis O’Brien/IBRC/ Siteserv deal.

Minister for Communications Alex White has said it is not for him to say whether there should be an inquiry into the IBRC sale of construction company Siteserv to a company owned by businessman Denis O’Brien.

Speaking on RTÉ’s Morning Ireland, Mr White said he had not had an opportunity to discuss information obtained through a Freedom of Information request with Minister for Finance Michael Noonan.

He noted that the bank itself and its former chairman Alan Dukes had said the best deal possible was obtained and he had no reason to disagree.

Noonan ‘satisfied’ with action he took over the SiteServ sale (Newstalk)

‘The €5million Was An Essential Component’

17 thoughts on “Are You Satisfied?”