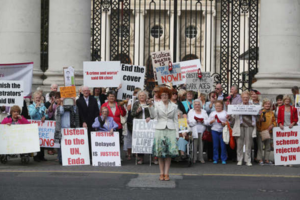 “A 74-year-old woman who suffered life-long pain after a symphysiotomy was performed on her 12 days before the birth of her baby in 1963 has lost her High Court action. In what was viewed as a test case for others, the woman had sued for negligence, claiming there was no justification for the controversial procedure.”

“In her action the woman claimed she suffered life-long pain and could not bond with her baby and had a nervous breakdown.

The case was heard in the High Court over 15 days. In his judgment Mr Justice Kevin Cross found that ‘the practice of prophylactic symphysiotomy in 1963 was not a practice without justification’.”

Lawyer With Links To Gilmore Gets Top Job (Independent.ie, January 13, 2011)

They Waited Until Reena Was On A Ventilator

11 thoughts on “The Pain Endures”