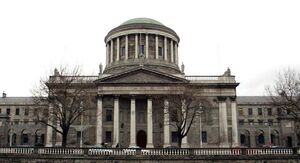 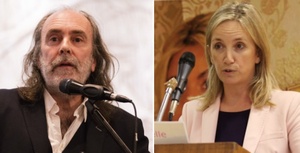 Aontú leader Peadar Tóibín has withdrawn his bid to seek a High Court injunction to stop the broadcast of the leaders’ debate on RTE’s Claire Byrne Live tonight. His counsel informed the court this afternoon the “injunction application will not be proceeding”.

Claire Byrne’s two-hour live debate from Galway will take place on RTÉ One at 9.35pm.

Aontú will not seek injunction over RTÉ debate (RTÉ) Businesses on Aungier Street, Dublin, are to take legal action to stop the opening of the State’s largest homeless hostel for rough sleepers at Avalon House.

The Peter McVerry Trust and the Dublin Region Homeless Executive intend to take over the backpackers’ hostel, above a branch of Starbucks cafe, and use it to provide emergency accommodation for 155 homeless adults.

A lease on the building has been signed by the trust, and the facility is due to open in January. However, local businesses say they will seek a High Court injunction to stop it going ahead. BREAKING: Legal proceedings have been initiated by the corporate watchdog in connection with matters at the FAI. For more see @Independent_ie

Office of Director of Corporate Enforcement has initiated High Court action against FAI as part of its investigation into the association’s finances and governance. Ruth Morrissey speaks after winning High Court action over misreading and misreporting of cervical smear tests @rtenews She and her husband Paul have been awarded €2.1 million in damages pic.twitter.com/qcqdcT2dhl

Ruth Morrissey has won her High Court action over the alleged misreading of smear tests and the failure to tell her about it.

The 37-year-old and her husband Paul have been awarded €2.1 million in damages.

Ms Morrissey and her husband, Paul, of Monaleen in Co Limerick, sued the HSE and two laboratories – Quest Diagnostics and MedLab Pathology Limited.

It is the first such case to have been heard in full and to be the subject of a High Court judgment.

Ms Morrissey spoke to reporters after the judgment.

At one point she said:

“What can I say, I didn’t think I’d be in this position because our Taoiseach told us none of us would have to go through this but unfortunately I’m one who had to. So I hope that’s a positive thing for the women who are left – that they don’t need to do this.

“To fight for what is there right to have a good life of what they’ve left.

“I’d encourage every woman to continue on getting their smears because it’s very important even though it failed me but it does save many, many lives and it’s a screening programme that we need. The HPV [vaccine], if you’re eligible, please get it. This is not a cancer that you want.

“And I’d just like to thank this man here [Paul] for being my rock through everything.”

Delighted Ruth has gotten justice here today. At the end of the day there are no winners, nothing will undo the damage that has been inflicted on Ruth and her family or the inhumane way in which she had to seek justice through out legal system in the last 9 months #cervicalcheck https://t.co/vmnWH8ctQ3