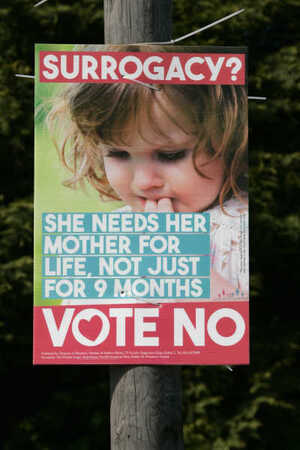 As you may have heard the vote on the amendment of the Constitution to widen the definition of marriage, to include marriages contracted by members of the same sex will take place this Friday.

So what has that got to do with those posters?

We asked Legal Coffee Drinker what’s it all about.

Legal Coffee Drinker: “Gay people will be able to legally marry. They will also be able to avail of all the benefits of being married, including tax relief, inheritance provisions, and, of course divorce and separation.”

Broadsheet: “But what about all the posters of sad children”

LCD: “Although gay couples can’t currently adopt as a couple, it is possible already for either of them to adopt as single persons. And in fact, independently of the referendum, the law has already been changed to allow gay couple adoption.
The Children and Family Relationship Act 2015, signed by the President on April 6 last, provides that cohabiting couples and those in civil partnerships have full adoption rights in the same way as married couples. It’s just awaiting a ministerial order to come into effect.”

Broadsheet: “And surrogacy, another source of concern from the no side?”

LCD: “[Health] Minister [Leo] Varadkar has proposed a change in the law on surrogacy, which would involve the surrogate giving up her rights to the child, but it hasn’t yet been put in statutory form. If the legislation on adoption doesn’t distinguish between married couples and civil partners, it’s unlikely that the new surrogacy legislation will either.”

Broadsheet: “Why are  the no side saying ‘goodbye mammy’?

LCD: [pause] “Because they either haven’t bothered to look up the law or they are trying to mislead people.”

Broadsheet; “So Gay couples may be able to have a child through surrogacy and this angers them?”

LCD: “Yes but the operative word is ‘may’. The surrogacy rules are the same for both straight and gay couples at the moment there is no indication that Varadkar’s new surrogacy proposals will dsicriminate either. You don’t need a referendum for gay couples to have kids through surrogacy.”

Broadsheet: “So even if the referendum is not carried by the yes side gay couples who are civil partnered may be able to have a child through surrogacy?”

LCD: “Yes though if the referendum is not passed I suppose the government might say well we won’t bother with gay couples.”