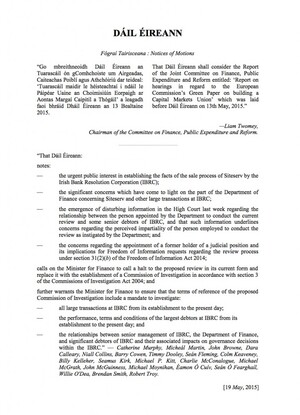 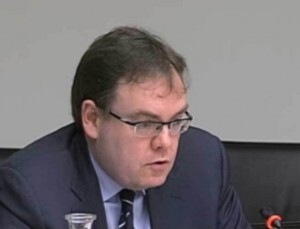 The KPMG motion (top) and Kieran Wallace (above)

A motion put down by Catherine Murphy and Fianna Fáil TDs [on the order paper for next Tuesday] concerning the involvement of KPMG in the Siteserv review  and other ‘matters’.

I’ve said from the start that the review – in it’s current form, is simply not fit for purpose. There are far too many conflicts of interest, be they perceived or real – on behalf of KPMG and specifically Kieran Wallace.

The most recent revelations in the High Court regarding the relationship between the Special Liquidator, Kieran Wallace, and some senior Debtors of IBRC serves to underline those conflicts and makes it impossible for the review to continue in its current form and that is why we are calling on the Minister to take the opportunity to reconsider and that’s what this Motion is trying to achieve.

10 thoughts on “Not Going Away”