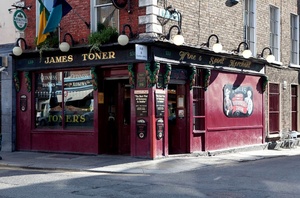 We’re bringing bands back to Baggot St! Back in the 80s and 90s, long before Whelan’s arrived on the scene in Wexford St, the musical hub of Dublin was centred around Baggot St in The Pembroke, The Baggot Inn and Toners.

Between these three pubs there were bands playing 7 nights a week with something for every taste. The Pembroke and the Baggot Inn are long gone but Toners remains pretty much as it was one of the oldest and best known pubs in Dublin with an excellent bar on the first floor.

Now the Alternative Sunday Social Club is running gigs again on Sunday afternoons between 4.00pm and 7.00pm and this week it’s the turn of El Clash Combo, Ireland’s first Clash tribute band. Support is from DJ Karl Tsigdinos and all three hours of fun will set you back a mere fiver!

The Ice Age Is Coming, The Sun’s Zooming In

Bluegrass On A Sunday?

10 thoughts on “Bringing Bands Back To Baggot Street”